Oh man, so many ideas... This game has got me hooked.

Though for starters, I'm more than sure there's a great amount of optimization that can be implemented to make the game run better. Late in a game, many graphical glitches will begin occurring such as the black hole's model becoming trapped in a certain spot or huge lights appearing. This also seems to be connected to performance drops. I also feel spaghettification could be reworked to be less GPU-intensive, such as replacing some of the particles with glowing wires (representing the light being pulled in strands). This would also look much, MUCH prettier. I attached a picture to give you a visual.

It would also be cool if there was a light bending effect around the black hole Itself, such as objects behind the black hole being reflected around it (if you've seen the GIF of the Earth orbiting a black hole, you know what I'm talking about). I'm not sure how hard this would be to program, though.

I'm sure I'll end up getting more ideas soon after I post this, there's just so much potential for this game to be a smashing success. 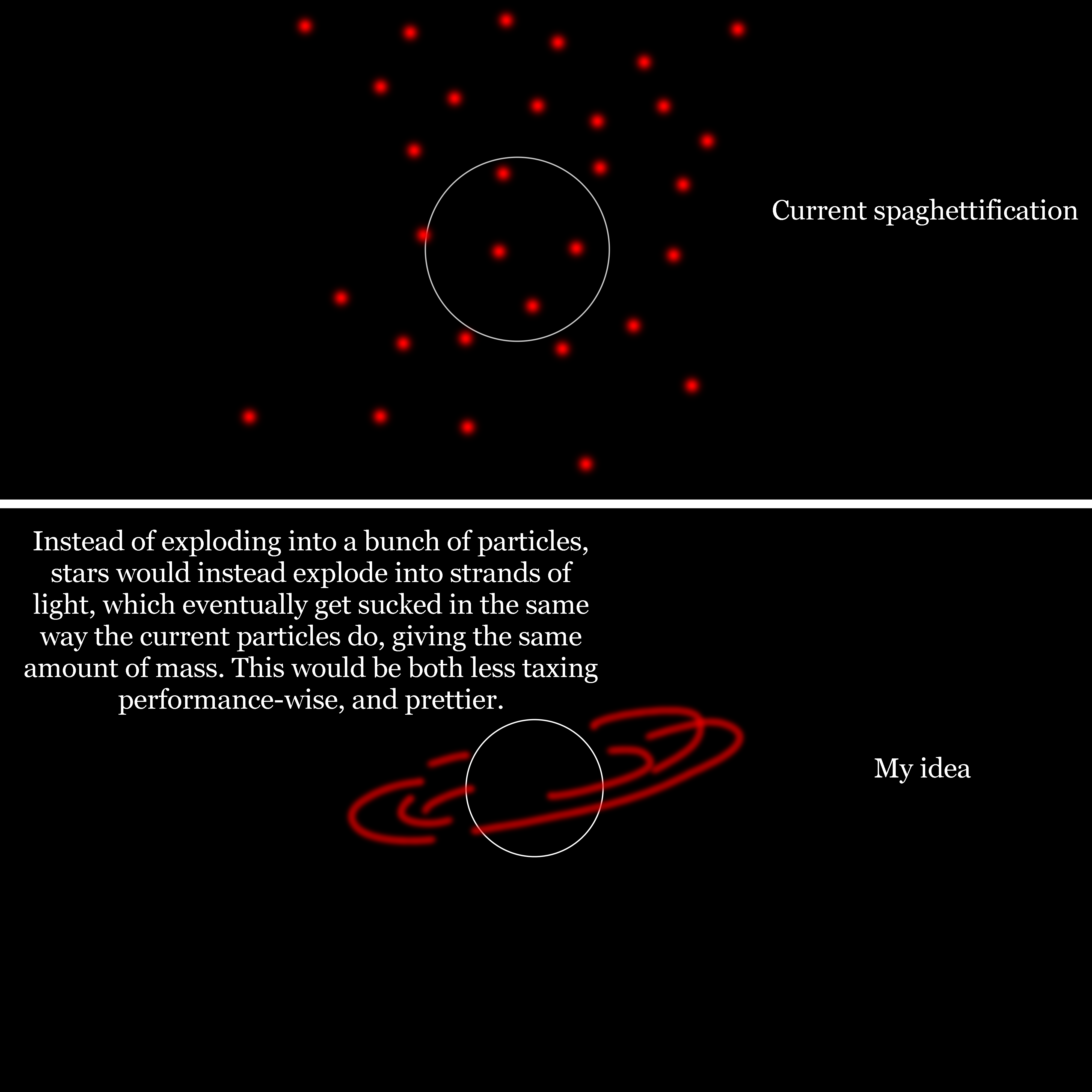 At first I was wondering why the Steam version was paid,  thinking it would be the same as the free version. Thanks for specifying, instant purchase from me. I'd love to see more content in the future!

As basic as it is, I love it. There's something really satisfying about gobbling up the entire universe as an omnivorous being. If only there was a way to get better frames on the huge universes...

In the first room, there's two pills. The pills respawn after every "high" you get from them, so you can stock up on a couple extras in there. I took a pill at the end, but didn't notice any difference... Still searching.

Edit: Found it. I put the solution in morse code so nobody accidentally spoils themselves.

When I saw the artstyle, I immediately knew it was inspired by Antichamber. Totally looking forward to the English release so I can play this and be fully immersed.

Interesting hybrid. I agree with Sibbo with the replicator; it gets tedious after a while.

Found it myself. I like experimenting. I also tried 1337 and 6969 but unfortunately those didn't give any funny results. xp

Lovely short. I love the fact that you can call not only the printer but the devil himself. :]

Absolutely mesmerizing. I'd be interested in seeing more options for editing the environment, such as grid snapping for symmetry or a flight path for objects while paused in time.

Lovely concept, very addicting. However, I have found myself struggling to find a certain item despite mashing the lever. Can't wait to see what comes next in this game.

Got myself a compatibility problem. My screen is extremely wide and I can't see some of the text, plus there's no clear resolution settings.

I decided to shut off the game and let her be. :]

No problem dude. I would totally play a longer game with the same premise as this.

If anything, I'd actually consider this a strategy game.

A corrupt take on horror, literally. I like how the only way to see what the anomaly/anomalies look like is to turn around and see for yourself, no death animation directly showing it consuming you or anything.

Yep, definitely NOT the turn I was expecting. You surely had me thinking there was some company promoting their new* tech.

I've been here for years

It's the only place.

This game fits well with depressing music. I love it.