Really good looking game! Art is purrfect, and gameplay is nice and chill!

Your core concept remind me of what we did, with different ideas in the application, but your art is without question far superior.

Really cool game! Played it on browser, to the point it became unplayable (around 22k points).

The art and animations are really good looking, the core gameplay is solid and fun to play, movement is really good, weapons feels good... A solid prototype which screams "Moooore, gimme more!"

My only complaint is that it's a bit on the easy side, spamming turrets is too effective, and the rocket arm, though a really good idea, feels a bit underwelming compared to them...

I join a screenshot where you can see that passed a certain point, power is basically infinite, and so are turrets ^_^' 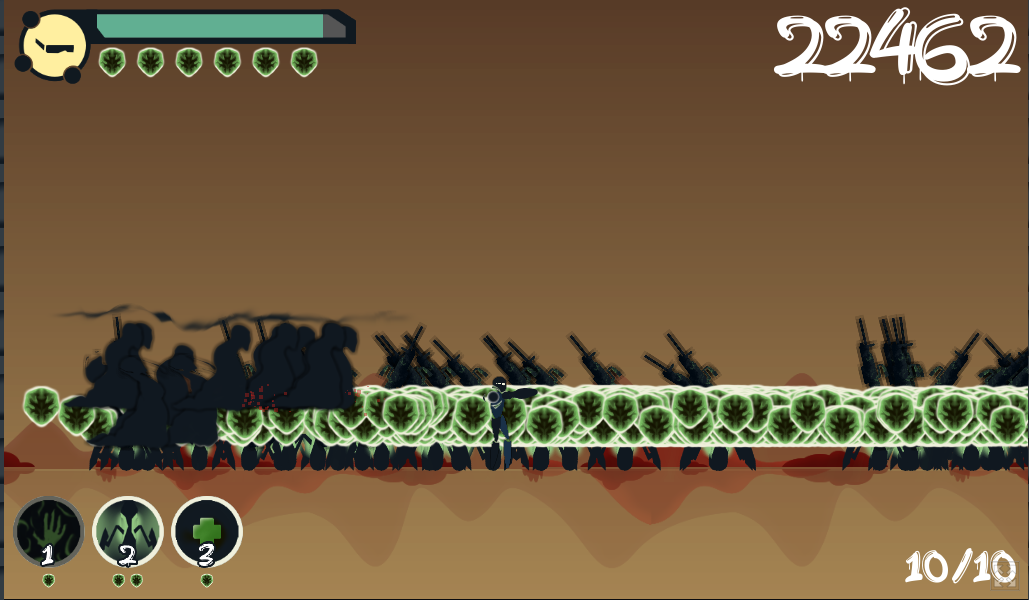 TLDR : Really liked playing your game, even moving around and playing with the rocket arm is really satisfying, I just would have wished for more with more difficulty! :D

Excellent game! Loved the art, the puzzle aspect of the stealthy platforming gameplay was good, and the game is pretty generous in terms of content (cinematics, lot of levels...), especially for a game jam game!

Scenario and dialogues were really fun by the way.

My only critique would be on the level design side, some of the levels are a bit tricky to complete, and sometimes need some "counter-intuitive maneuvers" with the given mechanics, which gives the feeling of "cheating" a bit... Not sure if my sentence really makes sense... To make it short, I sometimes had the feeling that the way I finished some levels was not the intended one.

But overall it is a good concept, that I really enjoyed playing!

Well made game! Your character's pixel art was really good, with smooth animations.

The core gameplay is pleasing, and appeal for more!

Damned, hadn't figured out about the double jump, much easier indeed! And that Abort Mission button, how stupid of me...

I played it again to make sure, actually now I know it, it stands out a bit more.  Guess I was looking for some king of hp meter, didn't notice my loot score decreasing. Maybe a colored flicker on the player would be more noticeable in the heat of battle?

Anyway, still really enjoyable, even on the second playthrough! You did a really good job!

Nice game, really chill! The web build worked for me, could go to the end credits without encountering any game breaking bug.

Good looking game, nice mechanics, a bit long on the beginning to get the first upgrades, and then a bit long waiting for 0² to deplete, would have been nice to have an "end exepedition" button of some kind. But overall a good experience!

Couldn't climb the credits up to the top though ^_^'

Well made game, feels a bit like "Hyper light Drifter". Nice visuals, movement feels good, a bit more feedbacks would be apreciated, I could not tell when, or even if I was taking damage. Otherwise a great prototype!

Oh, and the boss was a really nice touch, a bit too much on the "scaled up normal enemy" side, but hey, it's a game jam game right?

Once read correctly, the game feels much better ! Good job on the art, simple and efficient (the game page itself is beautifull)! Gamedesign is really good too! Well done! My only suggestion would be on a easier font to read.

If I could emit a little critique, I feel like mining and adding ressources is a bit slow, but your concept is still really fun !

Nice entry! The concept is simple and fun, I like the art, eatopians look nice and funny. I like the fact you can push other eatopians with the one you're moving, but I still feel like an easier way to move several of them would be appreciated.

Thank you for your feedback, glad to read it, and happy you liked our game!

We might add content, if I find time and motivation to draw more of these aliens :D

A really well polished game! Art is cute, the mechanic is simple but fun and nicely done, and the music compliment everything perfectly.

Overal,l a really efficient design for a really good game!

Really good game! The mechanics are fun and well thought, and level design compliment them very well with a well integrated tutorials!

Really well made game! The intro scene is nice, visuals and animations are very pleasing on the eye. Movement feels good, only the jump might be a bit short, especially with the jetpack not pushing you upward. A fall on a spiked pit and you just have to wait for death with no way to get back up.

A bit hard to aim, but otherwise really a good game! And graphics are smoooth!

Reply
Beginners Circle Jam #3 community · Replied to R41ndrop12 in OFFICIAL FEEDBACK: Post your links here for all, including myself to play
Abytron2 years ago

Reply
Beginners Circle Jam #3 community · Posted in OFFICIAL FEEDBACK: Post your links here for all, including myself to play
Abytron2 years ago

We made a game with friends, our first game ever : https://abytron.itch.io/asfs

It is a puzzle management game about planetless people.

Have fun, and please, give us your feedback.