matjamesj gave some good advice below, but I'll add a few points (read his post).

The game is heavily luck-based early on - restart if you run out of money, and start wasting turns. Challenging is actually more fun than tough because of this; you're more likely to luck into a game with some chance of getting a decent score.

Early on, you want income as fast as possible, so that you don't waste turns sitting around unable to do anything. Gold and blue planets make a lot of money at this stage of the game, and it's okay to get a red planet or two as long as it helps you get gold and blue planets.

Mid game focus on expanding, getting gold and blue planets when convenient. Avoid getting new red planets, and fix the ones from the early game. Get a couple of well-stocked research stations.

By late game, you should have more money than you can spend. Focus on happiness, since it multiplies your score. Get trade hubs and tourism planets, and make as many of your planets gold and blue as you can. Do absolutely anything to fix every single red planet before the end of the game.

Slipways and infratech are good in some situations, but don't overuse them.  If you connect a slipway to a slipway, you're probably screwing up. Similarly, don't overuse farms - 3 turns is a very high cost to get food to a planet.

Red planets hurt your happiness for your entire empire. This affects the $ production of all your planets, and has a huge effect on your final score. Consequently, they're not horrible as long as your empire is tiny, but quickly become a major liability as you expand.

Don't sweat early research too much. You'll have things to do even if you only have the range-extension tech (which you should always get). In this game, I built 2 research stations, each getting 3 metal. The first research station I built after I got mining bots, and the second station I got after I got slipgates (I needed to use a slipgate to get a person to where I had 3 extra metal available).

Trade hubs are amazing; they help you get gold and blue planets by soaking up extra resources, and they contribute directly toward your happiness.

I also like the tech that lets you change gas giants into stars. Among other uses, the special resource they produce can get you an extra pip of happiness from a maxed-out trade hub.

The last level techs usually come too late to make a difference, in this game I didn't use them at all.

Here is some explanation for the advice above.

The fundamental resource in the game is turns (also called months), and your job is to use your turns as efficiently as possible.

Early on, you can only pray that you get such a nice setup that your income will quickly outstrip your desire to spend money, otherwise you'll find yourself sitting around for many months waiting for your next annual paycheck (this kills the score).

By the midgame, you should have a decent income established, and many places to expand to, so you should expand.

By the late game, your empire will fill most of the board, and the remaining places to expand will be unappealing. However, you'll have technologies like infratech and trade hubs that enable you to develop your existing empire more completely. You should take advantage of these technologies to make your people as happy as possible before the end of the game.

Here's my best score on tough: 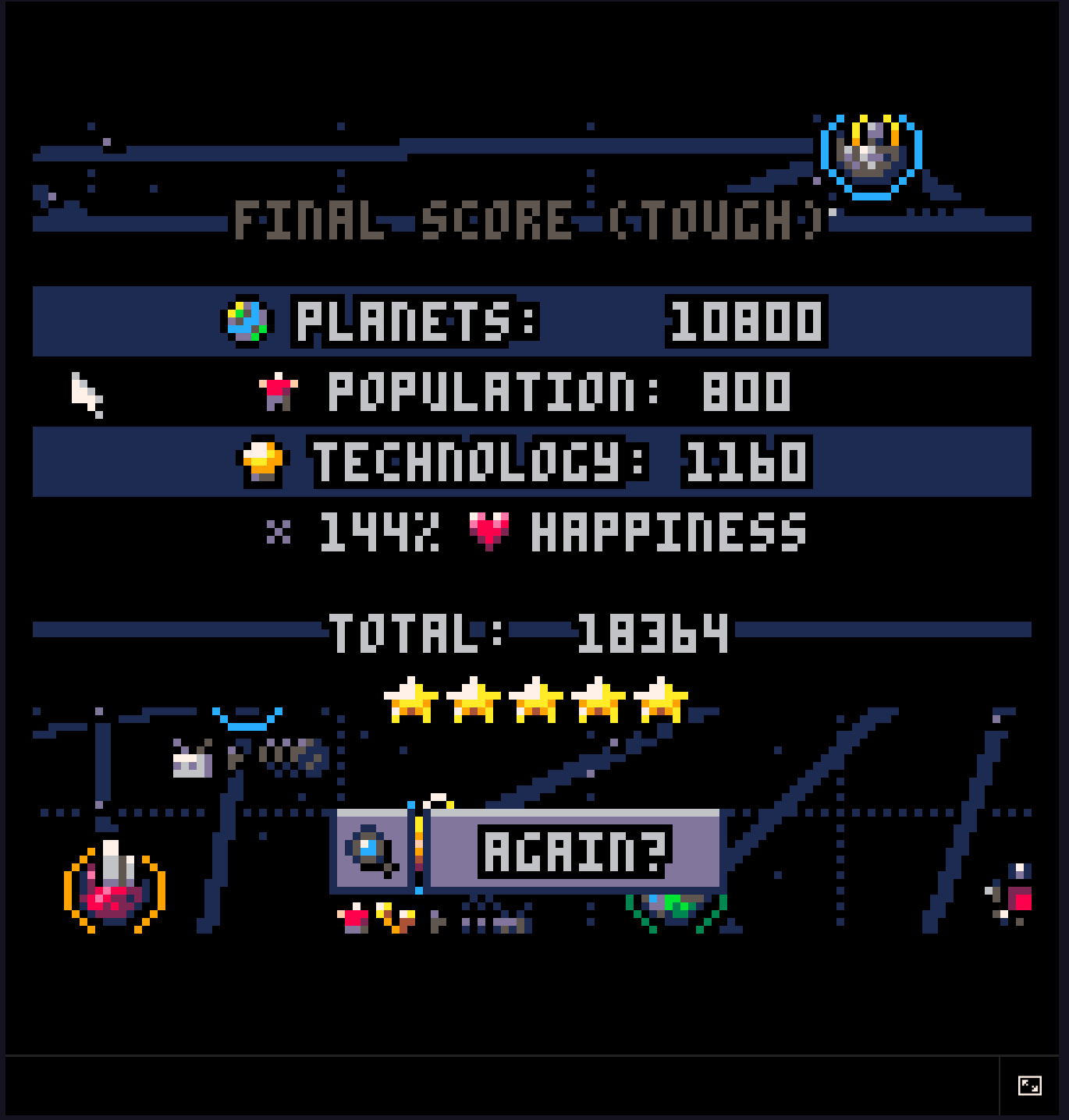 Here's my best tech generation game, with some fun gating: 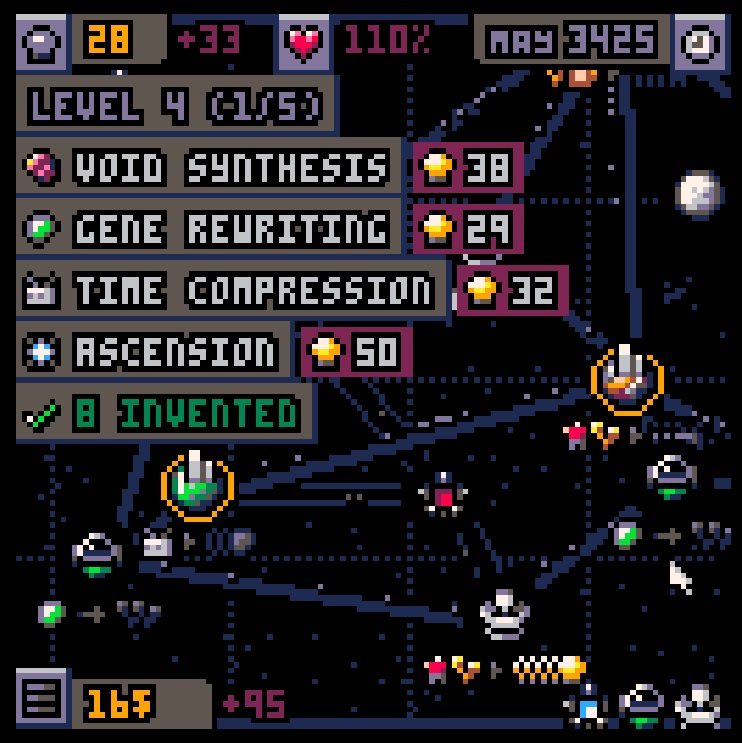 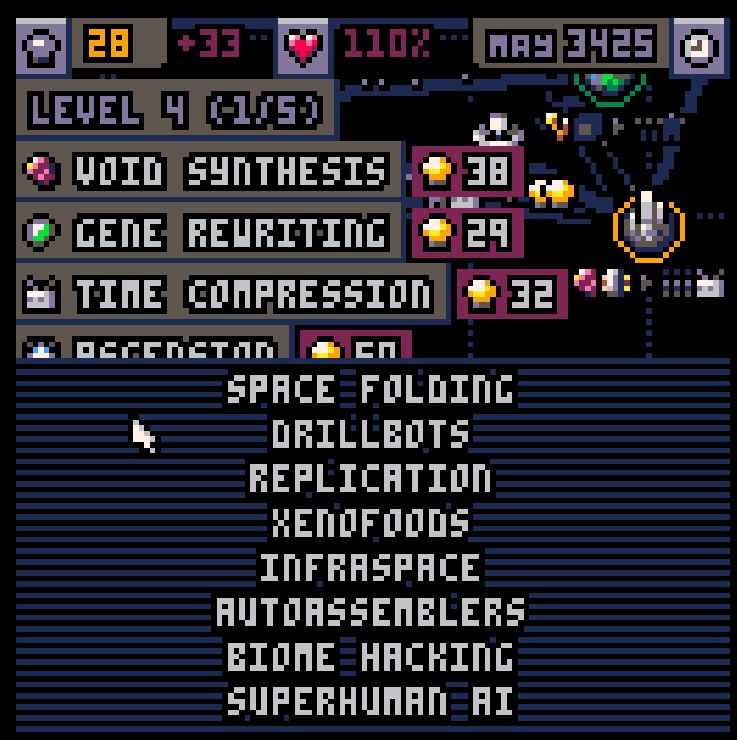 All from this lovely start. 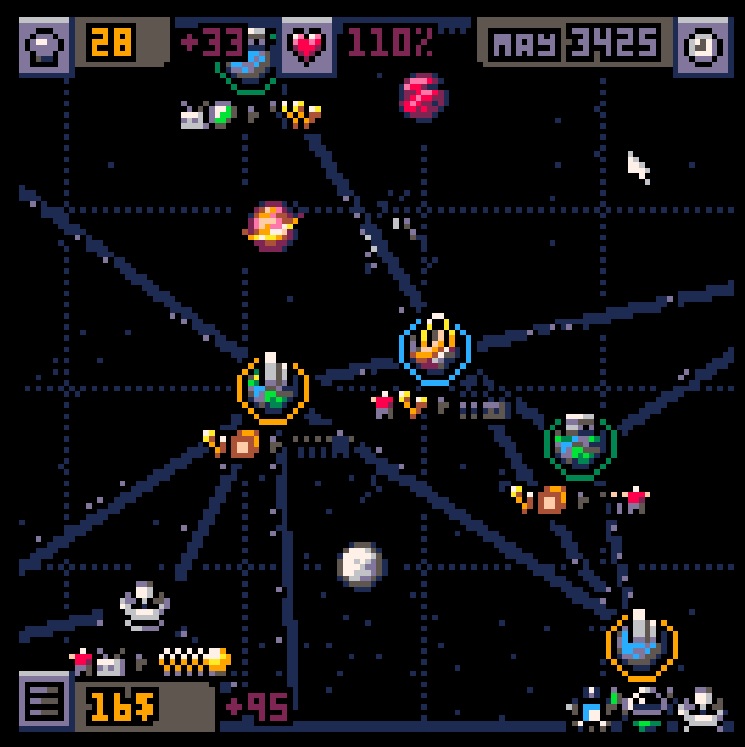