Well, to be honest, the rivers example was simply that: an example. I had hoped to save time by using that as an example, but no worries.

The full reason I'd like to be able to have single-tile support is that it helps in making things less uniform. I can more easily do things like this for example: 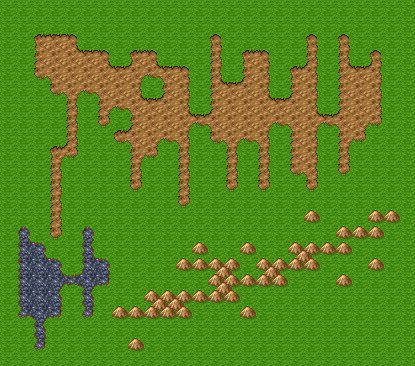 (Done in RM2k3 because it looks a little nicer)

I take a lot of pride in making my maps look good, whether RPG or platformer, but don't want to spend a bunch of time doing that when there's a lot to do. (Which is obviously why I'm using Tiled instead of GameMaker's built in tile editor.)

I can't imagine it would be too terribly hard to change over to RPGMaker's style. Your system already kind of supports it. Instead of simply drawing terrain boundaries in colored highlights, you could have it set up to use symbols.

I used my own tileset as an example, here. Left: symbols overlaying the tileset. Center: the symbols themselves. Right: the tiles themselves. The way I see it working is, the user would define the structure of the terrain, much like it already does, by marking with symbols which piece represents what part of the terrain as a whole. The editor would start with the tile marked with the 1x1 tile symbol, and then adjust itself and its adjacent tiles accordingly while the user draws in their terrain. It would require a little more work on the user's part to have a tileset that supports the system, or alternatively, it could work both ways: current style and RPGMaker style, with use of a tickbox option. If that seems a little too slow to have users set up based on symbols, no problem: simply have an auto complete feature. The user would only need to set down one corner symbol or a middle symbol in each chunk, and then click a button and Tiled would fill in the rest of them to the best of its ability.