I got an opportunity to talk to Michael Cox, marketing guy from Crows Crows Crows. He's @DevMicco on Twitter, he has DMs open. Great guy with super helpful advice.

That makes a lot of sense to me, so that's tentatively the plan I'm going with now.

In the meantime, we had another playtest session on Thursday and I came away with a bunch of balance tweaks and bug fixes, which I was able to knock out yesterday.

The most interesting news is, the game now has a Discord bot. 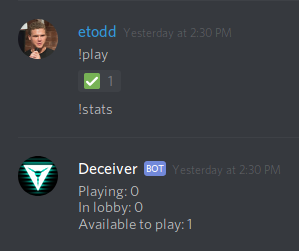 This thing allows you to indicate when you are available to play, and if anyone else is online or marked available during that time, you'll get a
notification. It also periodically blasts out statistics about who's playing.

I've been using vyte.in to organize playtest sessions, and it hasn't been great, so hopefully this will work better.