Cooldowns have gone through the most iteration to date. Aside from the health system, movement system, reticle code, and story. :P

People were having a hard time equating the three pips below the reticle with the amount of "charges" they had left. The bolter made things more confusing both for the player and for the code, because it let your fire three bolts per charge. Then the shotgun came along, which required two whole charges to fire. Things were getting crazy.

I did away with all that and replaced it with an actual heat-based cooldown system. Looks like this:

You can also see the new muzzle flash effect in that gif.

I finally re-installed linux on my desktop, and wonder of wonders, the graphics drivers worked out of the box. That never happens. I was shocked. Here's the built-in open source AMD drivers running the game faster than Windows 10: 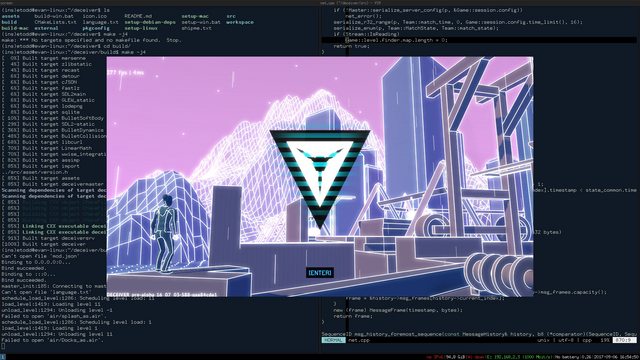 Jack made a pretty awesome spawn sound which had basically zero accompanying visuals, so I added some:

Adding controllers on the fly

I never realized what a huge win this feature is. Especially at expos, it's great to be able to add and remove players on the fly as people come and go. Took maybe 50 lines of code. Totally worth it.

I finally added some rudimentary friend functionality. You can create a server and mark it as "private", which means only friends are allowed to join. I also added the ability to mark others as server admins, which means they can change the server settings, switch maps on the fly, mess with teams, and kick people.

Tons of other stuff is going on in the background, including work on the first official trailer (woah)