← Return to topic
Shweep170 days ago

So with some adjustment I've arrived to this result:

This is a pretty good vertical slice as far as the game's intro and visuals go. The main thing I want now is for the train to move and have the backdrop generate/move stuff in the background on the fly. Another thing is to have the lighting/weather change as time goes on, which I'm putting on priority since, I like having a birds eye view on visuals really. 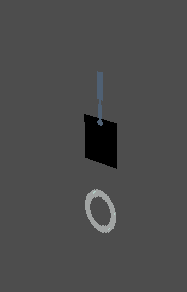 Oh yeah, a word about those pesky handles I'll animate later. I mentioned there's something off about them, well... they aren't able to cast shadows even that low to the top of the window. In real life they're actually quite high, and even with my liberties of lowering them I still couldn't get them to cast shadows. I think they make for interesting shapes so I decided to make a fake shadow casting 'sprite card' that's invisible way lower than it actually is. Is it realistic? Well no, but neither is the position of the sun in relation to the direction of the light/shadows being cast. In real life if the sun were that low the light would be casted to the other side of the car. Interestingly enough, after doing all this I discovered I was not alone in this endeavor:

In Ghibli's Spirited Away not only do they keep the handles low but the light shaft and the positioning of the shadows actually doesn't make sense realistically! But hey, it just adds to the scene to have moving circle shadows along the floor. I actually can't find many examples of anime shots where the artists made that adjustment though, goes to show how the studio at Ghibli were always inventive. Again, I'll get to animating the handles later, but first I wanted to mockup some lighting scenarios.

So the idea is to have every object in the scene lerp towards a target texture or color to simulate a shift in time of day / weather. This is pretty easy to do, but given my lack of knowledge in shaders it took a bit to understand how to get it going:

So the idea is to jump between each lighting scenario is to gradually add to the Blend variable then swap the textures while setting Blend back to 0 to repeat the process. Pretty simple. Now I actually gotta do that. Stay tuned.