The House on Holland Hill is proof that you can make any concept interesting witht he right direction and effort. You play the role of a pizza delivery man. You deliver food to this house over and over. On the surface it sounds kind of boring but during each delivery you get the option to get to know the residents more if you wish through dialogue choices. Even if you choose not to delve deeper you can still notice things are changing. A good job was done with the soundtrack and character design to say a lot without actually saying it. I enjoyed the story. I had my own theories which turned out to be incorrect. The graphics aren’t going to wow you on technical merit like Crysis but at the same time there is good art direction, good use of shadows and lighting and the style just plain works for it. One weird thing I noticed was characters don’t really walk. It’s more like they glide over the floor. On one hand it could be called a flaw but on the other hand it added to the creepy tension the game was building. On one delivery the owner of the house literally glided backwards all the way up his driveway to the door while staring at me holding the pizza I gave him. That is equal parts funny and terrifying.

I played the House on Holland Hill on Linux. I had one issue early on with the game not finding an executable to launch but the developer was able to get that fixed very quickly. One day after I emailed them they let me know they were looking into it and then later that same day they emailed to say it should be fixed and it was. The game uses a checkpoint save system. Usually I prefer manual saves but the game auto saves after each delivery and it isn’t a long game anyway so it wasn’t a big deal. Alt-Tab didn’t seem to work. I used version 2.0 of the game from Itch.io. My system used 2.1GB of RAM while playing and was at 15% CPU usage. It uses the Unity engine and takes up 703MB of disk space. It never crashed on me and I didn’t notice any glitches or bugs outside of the original executable issue that got fixed. There was only one graphics settings to adjust overall quality and your resolution option.

Overall I reccomend this game to anyone looking for a quirky adventure game. It is kind of like a first person adventure meshed with a visual novel. It took me 25 minutes to finish my first playthrough. It isn’t a long game but it also isn’t an expensive game. I paid $1.99 USD for it and would say it was worth at least $10 had they wanted to charge more. The story is interesting, the art style is great and it is an enjoyable way to spend a half hour. 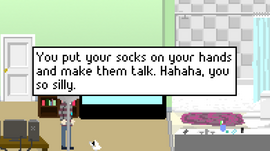 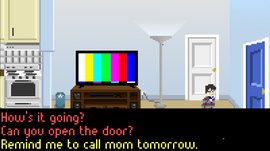 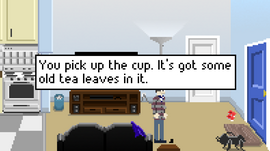