Submitted by Chad (@ChadSang2) — 18 hours, 4 minutes before the deadline
Add to collection 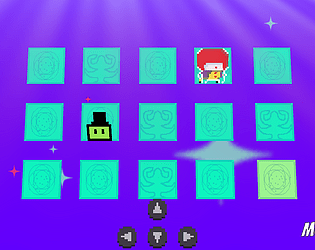 How long was your dev time?
Until yesterday, may be 14 hours

I kind of see the concept, but I just can't figure out what the laws of motion are in this game. I guess moving to different-looking tiles will affect the enemies differently. I somehow managed to brute-force my way trough them.

The level progression was nice.

The animations were juicy, if they also had some accompanying sound effects, I'm sure I would have rated Fun much higher.
(Unless there is actually sound, and the silence was just some bug caused by running the game with wine under Linux.)

Great work on the overall feeling of the game with the small animations that really adds up to the game feel ! I ended up doing random moves to try to win by chance because I couldn't figure out how the ennemies were behaving. I enjoyed playing it, well done :)

Cute little puzzler and a great concept but truthfully, some things just got plain aggravating, the clowns seemingly random movement mixed with incredibly strict limits on your own movement usually resulted in "run softlocks" if you will where you know that no matter what you do, this particular attempt will fail because the clown is already somewhere you have to move

I think what my point is that whilst the game is conceptually great, its random nature, lack of freedom of movement (due to the movement limitation) and unpredictable AI encourages mad dashes for the exit over thought-out puzzling