The Super Bus Squad return, this time: IN SPACE!
Submitted by Big The Dave (@GeeItSomeLaldy) — 13 days, 14 hours before the deadline
Add to collection 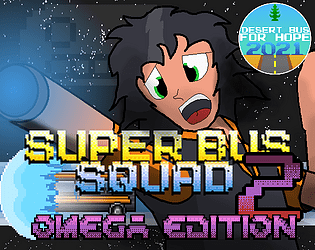 What would you like feedback on?
All feedback is welcome.

What did you update?
Added new levels, extended and modified existing ones.

There's a huge amount of content here, well done! The tutorial is well thought out, and everything I needed was there.

I think Steventus says a lot of what I'd have liked to say, but I do have some more points of feedback on overall game feel:

Otherwise there, there's a bunch of great content there, and it feels nice and polished. Well done!

This game had some quirks to which the levels were designed around which I think is pretty great! Though there were some frustrating aspects to your design so lets go through that:

Very well structured tutorial
There are nuances to your controls and game design, especially with how sliding lets you move on air essentially and this is taught extremely well in your tutorial level. Basic controls, destructible obstacles, etc. are all well introduced in the game.

Good sound design and art
Charging up attacks gives its relevant charging up sound and different firing sound based on how charged the shot is. Jumping could use a sound. Art is generally well understood except for a few nuances I will get into later. Controls are simple in the sense that, they are no different from general action/platformer norm that we have in modern game design.

Simple Game Design
As far as game feel goes, this is basically just megaman in different artstyle, and that's okay if that's what you're aiming for. Combat is simple and based on very simple fundamentals of timing and positioning.

Death by water or void feels unfair
When everything else deals some tick damage to the player, it feels alright because it allows for mistakes and players can learn from mistakes better.

As a result of that, when player instantly dies from water or void and get sent back to the beginning, it 'clicks' into that frustrating region and makes it un-fun very much immediately. After 2-3 more fails at the same water section of level 1, I pretty much just quitted and chose another level.

To alleviate the fairness, either stick a checkpoint in the middle of the level prior to the water section, or punish the player less when they miss a slide or a jump into the water.

This also means it is easier to identify destructible obstacles, platforms we can walk on, and etc.

As for level design, there are occasionally parts of the level where jumping is impossible and an enemy that can shoot is placed at the far end of the level. This feels unfair as players, on the first-go, cannot evade the oncoming fire while they kill the enemy, forcing them to take damage.

Overall, the game has great options, systems in place. The dialogue system is surprisingly well-built, options menu is well done! Gameplay is overall polished with no bugs and everything working as intended, but the fun factor is lacking. Good job regardless!