An adventure seed and suggested structure for a Legend of the Five Rings spooky, horror game.
Submitted by Ovid — 3 hours, 17 minutes before the deadline
Add to collection 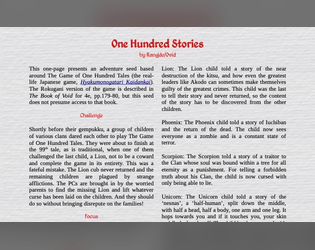 Thank you for participating Ovid!

Since we had only a handful of participants, we figured we could share some written feedback to hopefully encourage you as you go forward and create more adventures in the future. Mind you, these are all personal opinion and in no way reflect your standing in the competition.

This adventure is written in traditional Challenge, Focus, Strike format which lends itself well to a ramp up of tension at the end. In this adventure the players are investigating a mystery brought on by a game of one hundred stories, where there are children from each great clan sharing spooky stories with one another. However, by the time the party is on the scene the children are affected by a curse. It’s up to the party to find out how to fix the situation, and it will lead them to some otherworldly terrors.

The textured paper background is a welcome detail, the red text feels familiar to the CFS submissions to Kaze no Shiro. Most importantly, the text is legible and clear, and the information is organized neatly.

This adventure creates an opportunity for the GM to include their favorite horror stories into this scenario. Based on the default examples given, this certainly feels like a tour of Rokugan’s greatest horror hits. The GM should expect to have to get creative when creating NPCs for this adventure, since much of what’s mentioned for the default examples are not yet mentioned in 5th edition L5R.

The fun for the players lies in meeting the children, each with different levels and methods of communication, and putting together what happened based on their information. Then of course, the climax of the ending is a “boss rush” of some of the most famous big bad guys, of course depending on what stories the GM decides to include. This will likely give your players a run for their money, but if they survive it will be a story to remember.

The theme of overcoming fear is seen in the children: the incident was caused in part by fear, and some can hardly speak now because of their terror. The theme is also relevant in the PC’s, either because they are helping the children overcome this fear, or perhaps because the PCs will feel that fear themselves.

Thank-you for the feedback! I'm very glad I seem to have hit the notes I was going for.