A mix of pacman and RPG
Submitted by SoyeR — 11 hours, 55 minutes before the deadline
Add to collection 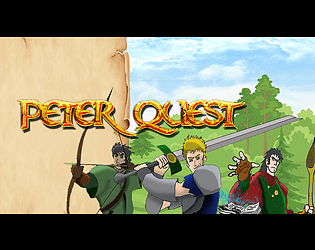 Really fun combination of RPG Elements and Pac-Man. Sadly, there were plenty of bugs. It started with the Mage being unable to target enemies, then enemies randomly getting hit, then a constant error message because the game could not find Fire1.ogg. It got to the point where random things were happening everywhere

Basic RTP graphics, with custom portraits for the hero and the 3 forms. The custom art was fine, but it needs some polish. Also the assets used in the intro cutscene don't really mesh well together

The story is fine for this kind of game, but I could see the language barrier in the dialogue. You need to have someone proofread your texts. I also noticed that the menu options were still in Portuguese

The voices in the beginning were nice, but sounded pretty low

I actually liked the gameplay despite all the issues and kept going through the bugs until I literally could not anymore, so that speaks good for this game's ability to attract. Even so, I still feel it could get old after 10 levels or so if no new enemies or mechanics are introduced

The idea is pretty original and fun. The game still needs a lot more polish as a prototype before its true potential can be seen however. Right now it is still too early to tell

Thanks for your rating! yeah i agree with all you wrote. i will try to keep going with this Project.
About the enemies in the end you can face a boss. and enemies its easy to create new ones but not have time for  IGMC