Are you ready to swing? Made for Houdini Game Jam 2022
Submitted by Dito Seregin (@terzalo) — 2 minutes, 31 seconds before the deadline
Add to collection 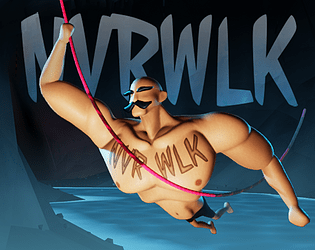 How did you use Houdini to make your game?
We made a "room generator" HDA to be able to quickly create parts from which the level is constructed during gameplay. A room is constructed from two portals using predefined shapes, which are bridged to create room's walls. The game then uses baked information about portals' shapes and positions to properly place rooms in a sequence.

Base model for a character made of detached sculpted blobs is loaded into Houdini, remeshed, UV unwrapped and rigged with KineFX tools.
The model is also textured in Houdini by baking vertex colors from a few object onto the mesh.

List everything that was made before the jam. Pre-built, assets, textures, etc
Menu template from previous project

Which game engine or platform did you use to make your game?
Unreal Engine 5

Besides Houdini, what other tools did you use to make your game?
Blender for sculpting the character base mesh
FMOD
Mixcraft 9 Pro Studio
Substance Designer for environment textures
Glimpse
Audacity

List instructions and tips for playing your game here.
Swing on the ropes and see how far can you go.
There is no goal to reach aside from mastering the movement and going as far as you can as fast as you can.
If you fall down​ or get stuck, restart from the main menu.

Bug notes:
Do not use the hook button (LMB) while you are on a regular rope. It will make you drop down. Only use the hook button in mid-air when in proximity of a hook point.
There are a few nasty bugs with how hooks behave. Among other things, a hook point will falslely visually signify a possible connection if you approach it from above. In actuality, you can only connect to it if you are lower than it is!

I made a little trailer for it showing how movement works: