A demo of a 2-player game, somewhat like Settlers of Catan (but with guns!)
Submitted by ObsidianOps — 1 hour, 11 minutes before the deadline
Add to collection 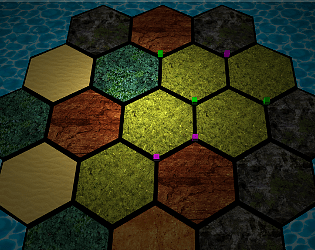 Edit: I think the laginess came from nouveau driver I was using, oops.

With gameplay being a rough idea of what you have in mind, I like where you're headed.

Graphics were surprisingly nice, seems like it was all in 3D.

Sound effect for the gun, no other guns available. Weird thing was when the mouse wasn't moving the gun kept moving. Gameplay seems like it could be really fun with more stuff implemented (and balanced, because Player 1 always has the advantage since they start first). Stability was alright but the FPS level lagged a lot.

Overall a nice game with a great idea! Hope to see it fleshed out more!

This project has been a huge learning experience for me. I had set a personal goal of creating a game for this Jam, even though its been years since I've done even basic programming. The game is mostly hacked together free assets from the store (primarily FPS Constructor, the Troll Model, and the moving water texture), but even that was a whole week's worth of effort for me. It was a great experience though, and I'd really like to thank the GOL guys for hosting this event, which motivated me to jump in and give it a try. I hope you can enjoy this game as a early demonstration of the idea I was going for.

Thanks for taking a look!

I first envisioned this game as a city building game somewhat like Settlers of Catan. However, the key difference was that in addition to building cities and roads, you could also stage an armed assault on an opponent's city. The armed assault would procedurally generate an FPS level based on the terrain of where the city was placed, and you could either win or lose the assault, which would decide who had possession of the city in the end. This would all be based on the economy (militaries are expensive, after all). You would also have ways to pay for increased defenses in your city.

There is a lot missing right now. Currently two players can alternate placing cities, and can select each other's cities to attack. This will launch into the fps mode, which you win by killing all the enemies. The enemies are currently statues that pose you no real threat, but suffice to say with some more time to implement AI, they would more than happy to destroy you! The first player to get to 10 cities wins.