Made for the Games Made Quick jam concurently with the AGDQ Marathon. The name is a take on "Ninja Gaiden"
Submitted by Big The Dave (@GeeItSomeLaldy) — 2 days, 7 hours before the deadline
Add to collection 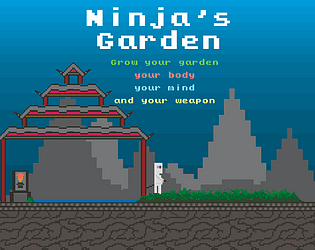 Neat platformer! I included it in my compilation video series of all of the GAMES MADE QUICK??? Games, if you'd like to take a look :)

Well! I wrote a huge comment, and then itch completely ate it. Shorter version:

The three sawblades were fairly frustrating — at first I thought I needed a powerup to get past them, the timing was so tight. Then later the lamp broke, which made the sawblades worse, because now if I missed the timing even once I had to start over completely.

It took me embarrassingly long to find the forest; I'd found the leaf at the castle entrance after getting the double-jump, and that let me see the room above, and I was convinced I could get up there from elsewhere in the castle. Whoops.

All told, 25 minutes to get 100%. I enjoyed it, though, and I'm glad I stuck with it! I know the perils of trying to make a puzzle game under extreme time pressure :) I really liked the map design, and the little peeks at later paths that shared the same screen. A few pretty cute touches, too, and I feel weirdly proud of having grown a little garden... from... magical floating leaves? Yes.

Fun! I got 100% in just over 11 minutes. It felt very good to play -- maybe a little easy to run into obstacles close to the edge as you enter a new screen, but not a big deal.

Biggest stumbling block was definitely the hallway with three saw blades early on. I hadn't figured out how to heal yet, so touching one was instant death. I tried jumping over the first blade twice before realizing I could walk under.

The puzzle with the two blocks took me way longer than it should have, ha. An interesting look at my own mindset.

Came across the hidden passages right away. Nice placement, I felt they were intuitive.

A little funny that the wooded area starts off with an intense platform ride, and then no danger after that, but I imagine that's a time-constraint thing.