A pixel art tool for the eternally rushed game artist
Submitted by arttuys — 9 hours, 8 minutes before the deadline
Add to collection 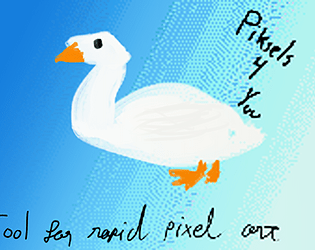 Which parts of the entry did you take from other sources (free assets etc.)?
Excluding programming languages and UI framework, I did use equations from: "http://www.easyrgb.com/en/math.php". In addition, smiley used in the demonstration screenshot on Itch.io was sourced from: "https://www.publicdomainpictures.net/en/view-image.php?image=33364&picture=smiley"

Which parts of the entry did you make BEFORE the jam started?
Not much really, mostly some brainstorming based on the possible ideas I submitted for the theme (one of which got chosen ;)). That did not translate to any concrete code before the jam, but most likely sped up the process in some way as I had a vague idea what to start doing.

How many people were on your team?
One, just me

What tools, engine, language, etc. did you use?
Primarily Rust and GTK with Gtk-rs, plus a number of helper libraries listed within the .ZIP file

Neat tool, I didn't have much time to play around with it. I'd love to see a few more features for image manipulation and then batch processing of multiple files with the chosen preset. Keep up the good work :)

Sadly, I did indeed run out of time for development, as I had some technical hitches along the way. I intended to make a preset feature, but as the time limit loomed closer, I had to cut it from the feature list. There's a fair bit of technical hitches I'd probably fix first, but I can definitely see a case for more advanced manual image manipulation (e.g curves, color space selection and conversion adjustments, palette tuning before clamping) and multi-image batch features.