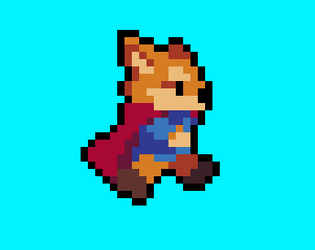 Let people know how long this project has been going, or share a bit of its history.
Just learning how to use Godot networking been working on it the past week!

Doing networking is no small task for a jam!  Game also looks nice, and the sound effects were spot on.  I was playing by myself so there wasnt much to actually do though lol.  I noticed some render order issues, like the player name renders under the bushes, and theres one part of the map that looks like it should be pathable but its not because the wall collision extends to the top of the wall.  There is a bit of a style clash between the low res sprites and the higher res terrain though.  Dropping bombs was alittle inconsistent, sometimes they would appear behind me and trap me, or slide me in a direction I wasnt expecting.  The game has lots of potential if you decide to keep working on it!

Oh I was also getting an error in the console when dropping bombs related to a player animation node.

thanks so much for the feedback! I can do a lot to polish the game for sure, I was using it to learn Networking.  I will look into those things thank you!

Very cute! Love the style and the sounds. How has your experience with Godot been? I've been considering picking it up.

Submitted
The Royal Game of Ur
LikeReply
BalagamesDeveloper2 years ago(+1)

Thanks! I love it! its a lot stronger then I thought it would be and community is great!

Good job with the networking, could use some polishing like gui, or dying animation, but still nice

tip - if you export as release and not debug, you don't have to worry about the .pck file :3

That is super helpfull! thanks so much :D

ah! Just remebmered that you also have to check "embed pck" in export settings.

The release thing is so the console wont show up