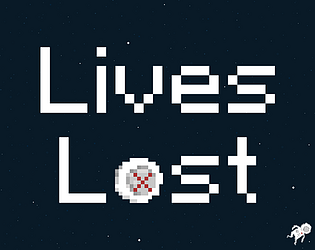 I absolutely loved how this game played. It felt really nice and everything was done decent enough to where the game didn't fall flat because of it. Ya'll did a pretty good job, Very good entry maybe even the winer!

Submitted
NO GRAVITY - To the space
LikeReply
mariusvnhSubmitted2 years ago(+1)

I think you should add a restriction like a time limit of a maximum death count but overall I really like the assets, design and the gameplay mechanic

Submitted
NO GRAVITY - To the space
LikeReply
HungryMicrowaveSubmitted2 years ago(+1)

I really like the idea of this game, search around for item, take them to a certain location. The game has some good mechanics too like the limited fuel before you die, and the randomly generated rooms but there's two things I though of that would make the game a bit better to play. One of these thoughts is a mini-map so when you started a game you would know which rooms are locked off from one exit and open from another. The second thought I had is a limit amount of death before you have to start again so there would be more of a reason to use boosts carefully and it would also prevent the ship from being filled with dead bodies. Overall I'd say 7.5/10.