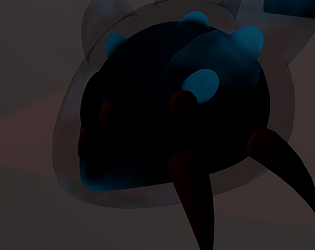 I stayed alive for 355.5(ish) seconds. I don't know if that's good or bad. :) The game was interesting! It took me a bit to figure out how to cook things. The little pets were neat. I wasn't sure why they all got so hungry at the end but I had 5 or 6 by that time. The security camera following the hazmat-suit main character was a really nice touch, as was the hanging emergency light and the open toilet. Good job!

Wonderful modeling on the critters, the player needs a bit more feedback on what/why things happen though

Submitted
To The Bottom!
LikeReply
FalcolmreynoldsSubmitted1 year ago (1 edit) (+2)

Needs sounds/music. The little bugs are SUPER cute. The game could definitely use some instruction, though, as we never figured out how to make the food blue. Also, there’s a typo on the game over screen. It’s a really cute game, but it’s a little difficult to understand, which takes away from the experience overall. The theme is more cute than it is horror, as well.

ok so ima go in order of the ratings. Firstly is it a horror game? well i think so, the map is very horrory but other then that there isnt annything horror in it. secondly is it fun? no, it feels like a first test build to test the pets behavior and animations, basically everything else is missing. now what about the GameDesign? well i think with more work it can turn into a pretty good game, the idea is good but there isnt enough in it to safely say its gonna work out or not. still very well done!

Theme: Not horror per se, but adhering to the horrific creatures trope

Fun: There is an interesting idea in here, but it's not well explained and the game is probably not finished fully. For what it's worth, feeding tiny monsters meat is a fun concept. I don't know why I died (probably the red one was eating me), so some feedback like a healthbar would go a long way.

Game Design: The game could use a bunch of sounds, maybe some ambiance. Main character didn't have animations, but the creepy crawlies' ones were pretty cute. This is a neat concept and I'd like to see it more realised, as I'm a fan of taking care of pets in games like these. The monsters changing in unpredictable ways is a great mechanic - being able to dispose of the undesirables would make this more interesting and give players a choice between keeping his tiny horrors alive and keeping himself alive.