perry the squished pear
Submitted by HCG (@HantsCGaming) — 4 hours, 51 minutes before the deadline
Add to collection 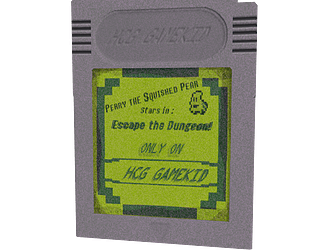 How did you interpret the theme?
used gameboy limitations, 4 colors, etc..

How was your experience in this jam?
very fun time, i have been waiting for a theme like this, i like the retro stuff :)

I liked this game, it's a platform game with good physics and challenge!
Just be careful when programming the controllers. You problably used "Input.GetButton("Horizontal") for the movement, so WASD was working as well. It works fine, but once I made a game with the same thing and forgot to deactivate the arrow keys. So when you moved with WASD, the movement animation played fine. But if you moved using the arrow keys, the player just moved, with no animations... And this happened while a guy was playing my game on Twitch XD
Congrats on your entry ^^

thanks so much for a nice review! you are right about the input, I knew wasd moved player a well, so the anims will respond to that input as well! Thanks very much for playing my game!!