A ttrpg of tricksters, lessons & desires.
Submitted by Kurt Potts (@kurtpotts) — 30 days, 6 hours before the deadline
Add to collection 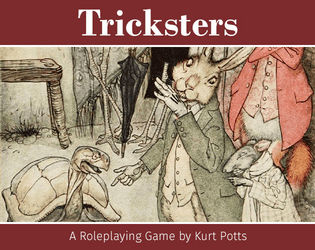 What a great game!

In Tricksters, the players play different types of tricksters from folklore or myth. The game immediately lays out the premise in a concise fashion: "Become a trickster charged with protecting a small village. Teach the villagers lessons and chase after your worldly desires. See what sordid tales these mortals tell of your bizarre interventions." In other words, you do exactly what tricksters always do in stories.

In ten pages, Kurt manages to create an RPG that feels fully flushed out, with all the pre-requisite sections for setup, play, and facilitation, and yet wastes no space. The game makes good use of colorful public domain art of trickster animals that, combined with some great layout, gives the game a lovely look.

The game reminds me, in a way, of Golden Sky Stories meets Aesop meets the very lightest influence of older folktale games like Changeling (but with none of the latter's baggage). Although completely different than GSS in approach and resolution mechanics, the notion of local supernaturals interfering and helping in a local village makes the two games feel like kin.

* I love the "Creating A Village" step that has the players and facilitator cooperate to establish the setting they'll play in. More and more I enjoy a participatory process of worldbuilding, as it often helps guarantee a higher success rate on a fun-time.
* The game doesn't try to nail down a set list of tricksters, and name-drops a few prominent examples from different cultures. I love that it then takes a moment to request respect from you when portraying important figures from other cultures.
* Speaking of small steps with big impact, the use of a small 'pronoun' field on the character sheet is a lovely touch. I would have never thought of it before, but especially for convention games with diverse strangers it makes it so much easier to get the right pronouns out front and center.
* The game's resolution system is a 'build a pool, take the highest result', and I love the determination of success based on three categories: "Teaching a Lesson" and "Fulfilling a Desire", which represent your purpose and distractability, and "Testing Fate", which covers pretty much any other case. The first two have a quasi-PbtA list of success/failure resolutions that all forward the fiction while reinforcing theme. The latter is a 50/50 pass/fail, which helps guide the players back on course by encouraging them to focus on their themes, in my opinion.
* The last two pages are for the facilitator, and they do so much guidance with so little space. How to set up Dilemmas, the game's core scene focuses, coaching on how to handle scene transition when you're used to more linear games, and my favorite, a "Break glass in case of Lull" section to help punch things back up if the game's energy sags.
* The character sheet is great, with a classic look up front to fill out your details and a worksheet on the back to guide you on making your character.

* The character creation rules offload a good deal of the process to the character sheet, which is a separate PDF. I wish it were also included at the tail end of the booket, because if you somehow ended up with just the booklet you'd be incapable of finishing character creation.

Tricksters is a strong game that in a very small package feels like a complete product to compete with "traditional" fairy-themed RPGs at the table. It also feels like something that would easily transition to LARP. You could run oneshots or keep visiting the same village over and over, and I for one am really eager to see more "small town story" games out there.

Rating: One Goose and An Avacado out of Three Toasts! Absolutely fantastic!

(I hope this was the right place to put something like this. Still getting familiar with itch.io conventions.)

Thank you so much for the awesome review!

You're right about the character sheet needing to be in the PDF. I'm working on the printer-friendly layout now so I'll update the rules PDF at the same time.

I'm not sure where the best place would be to put reviews or if this page survives after the Jam is over. If you want, there is a place to add a rating on the product page (hidden in the top right) which allows you to add some text or comments are open there as well.

I'll make sure to rate it there, then, and/or move the review over that way if it makes sense. ^_^