Submitted by Per K Grok — 31 days, 22 hours before the deadline
Add to collection 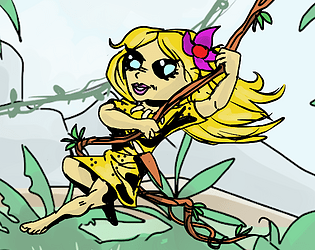 I really like this game overall.   What is good about the gameplay is the variety.  I also like the interaction between the main character and the loin.  During the first stage, I like that fact the you can walk or even run.  But,  when the main character is knocked down, she will just stay down for quite some time, which is bothersome.  During the second stage, swinging on the vines is a great change from the first stage.  I would have liked to have seen being able to climb up or down the vines, and even avoid dangers that could be on the vines.  Again, this is overall a very good effort.