How far can you get in this hectic little minigame?
Submitted by JordanDubeMedia (@Jordanopoly), Lilkauzi — 51 minutes, 41 seconds before the deadline
Add to collection 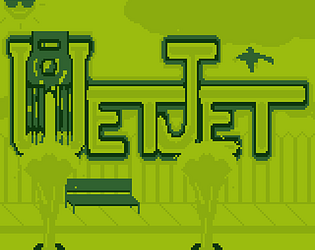 Game Controls
Q to lean left, P to lean right, B to boost up

Description / Background
You just got a brand new jetpack!

The problem is, however, it only runs on water. Luckily after the sewer pipes burst, the roads are gushing water from the manholes.

When you are over a manhole, your jetpack refills. If you run out of water completely, you cannot move.

Press Q to steer left, P to steer right, and B to rise up.

Have fun, and thanks for playing!

I was really frustrated for the first couple minutes I was playing because it didn't seem like there was much I could to get between large gaps. If I hold B and P, I can't always make it to the next pipe before running out of water and I feel like I just take damage for no reason. And stopping seems really confusing - sometimes I release P and I stop immediately, sometimes I seem to drift for a while and it makes it hard to stay over a pipe for a refill.

Once I figured out I could just tap B to hover, basically indefinitely, it instead became frustrating because it seemed like I could keep going, but then birds would come out with no telegraphing to damage me. It just felt random at that point.

I recall one of you said it was meant to be like a QWOP style game, with hard controls. With QWOP, it explains that each key is a leg muscle, and so you can directly see what pressing the keys do to the player avatar. And your goal is to move forward, by using the keys to indirectly control the avatar. But here, the controls are just left, right, and rise, which is pretty direct control. So it seems like not a great comparison, besides the actual keys that are used. Also, I'm not sure why you would want to steer left in most cases.

Submitted
Howls of the Wind
LikeReply
JordanDubeMediaDeveloper2 years ago (1 edit)

Hey, Thanks for the feedback! Glad you checked it out. I've had a few other people talked about the controls being a little too difficult/weird, so I think after the jam results have been made I'll go back and change some things.

As with the movement, we were short on time so we were limited on how much we could polish to get the gravity of the player and the rotation and boost just right. Of course this is a game jam, so there's never enough time :P

Thanks again for playing, have a great day!