It's About the YearningView project page 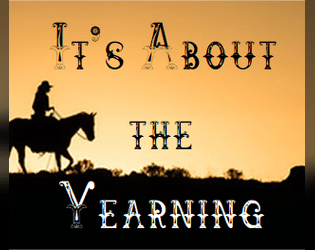 It's About the Yearning's itch.io page

Thanks so much for this. Just a few stray thoughts.

One thing I love about this game, particularly in the context of the jam as a whole, is that it gives the player a relatively rich setting to work with. I think many designers, wanting to give players free rein to create radically different futures, understandably took a very light touch to worldbuilding. But the risk is that players feel unsupported or, when put on the spot, they reach for world elements that are fairly familiar. It’s About The Yearning knows what it’s about: it’s about cowhands on Mars!

I love “No two Martian weddings are alike” … both (a) succinctly inspiring players by rooting their imaginings in something familiar and rich, and giving them maximum permission to do anything with it, and (b) the way queerness has its special affinity for something to do with desire / love / romance / sex etc. while also potentially questioning and wobbling any norm whatsoever.

I like this: “Some of the work these cowhands do is illegal. Some of it is immoral. Some of it is legal but immoral, or illegal but moral. All of it is deeply personal to the cowhands doing the work.” It feels like for some players this game might turn into a framework for reflecting on the polarisation of US culture (and other cultures). How do people steeped in very different ideologies and ways of life attempt to understand each other deeply? And how do you dramatize such attempts without playing into glib centrist-liberal romanticizations of the power of “just listening to one another”? It doesn’t seem like the game offers an easy recipe or anything, but at least it brings together some weird and inspiring ingredients.

Is this a typo? It > its? “It a fun diversion,” your advisor says. “Just don’t lose sight of what’s important.”

Not sure, but … consider rewording the beginnings of some/all Bonus sections to bake in the “this is optional” vibe? E.g. Bonus: “Maybe on Mars, research is its own industry. At the bottom …” “For example, the first cowhand camp was established” “Is there marriage on Mars? Maybe there is, but it’s a funny thing” etc.?

There is also the question of settler colonialism and the Old West. Is there a risk of the game being played as a I’m Not A Racist I Just Humor Racists Simulator?

Thank you for sharing this work!!!

Thanks so very much for your thoughtful review! And for catching our typos. :) I'm glad some of what we hoped for is coming across. There's so much more we want to explore in this game's universe, but perhaps that is for another time. I like the reframing of bonus material suggestion and all your thoughtful considerations.