You enter a haunted mansion where you believe some friends recently went missing.
Submitted by blockerz — 10 hours, 27 minutes before the deadline
Add to collection 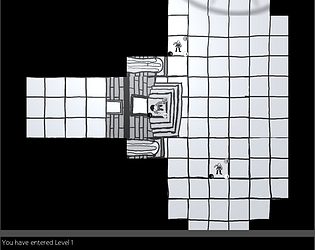 I really enjoyed this game.  The whole aesthetic with the grayscale hand-drawn tiles is fantastic!  Really clever way to handle the tile art and level generation.  Combat was also nice with the deterministic system, allowing the player to really strategize with no interference of that cruel RNG.  It also made stat upgrades interesting, because each one meant a concrete difference toward how the player could approach each encounter (e.g. a damage upgrade can cut the health lost to certain enemies in half by killing them a turn sooner).  Once you memorize which number applies to each stat, the UI is very easy to read at a glance.  The simple stat system works great with the deterministic combat system.

The number pad controls were awkward for me, it's the first game I've played that uses a "telephone keypad" orientation instead of what I'm used to using on a computer keyboard or calculator.  I wasn't able to play with the number pad on my keyboard due to this.  Fortunately the expanded WASD controls were usable, but not ideal.

When you re-enter a floor, all enemies respawn -- I don't know if this is intended or not (could very well be the spooky house you're in).  Either way, it does allow the player to re-roll the enemy layout by going back and forth between two floors (and I didn't check, but does this reset treasure chests?  could be used to farm if so).

So the biggest issue I came across is that monsters aren't visible on stairs (you can see their damage number but that's it).  I actually lost my game on level 8 because I thought combat was over and I started mashing the "wait" command to heal, but instead a bat that was hiding under the adjacent downstair poked me to death before I realized what was going on.

Overall this game was a very pleasant experience due to the hand-drawn aesthetic and the deterministic combat system  :)

Thanks for the detailed feedback. It is really appreciated!

I added a fix for the numpad to the Post 7 DRL version. It was implemented incorrectly. I also adjusted the z-order for the enemies to try to prevent any unnecessary deaths in the future. I know how annoying it is to lose progress in a case like you described. That's too bad as I would have loved for you to see the final boss I implemented on level 10.

I was very happy you liked the way the dungeon came together and the art style. That was a major part of my vision for the challenge. I wanted to do so much more with it but I felt I got far enough to give a feel for what I had imagined.

You are right about the floor enemy reappearing when you move back up. This could be used in unintended ways. I did put a check in to prevent acquiring more items than your current depth allows.

It is good to hear the deterministic combat system was well received. I thought it was fun but was looking forward to more feedback from people on it. This was also an area that I had more plans for with temporary stats buffs or debuffs but ran out of time.

Thanks again for taking the time to review some of the completed entries for the challenge.