YOU DID A BAD THING NYK!View game page

Guide a dog thru 9 "NES-HARD" levels of HELL!
Submitted by nykTV (@nyktelevision) — 3 days, 23 hours before the deadline
Add to collection 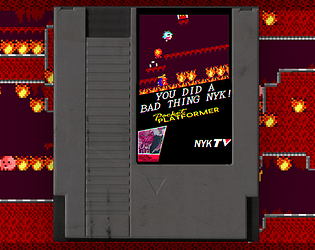 YOU DID A BAD THING NYK!'s itch.io page

very nice game! makes much fun! sweet graphics, but the sound is boring!

Submitted
Be a Hero!!!
LikeReply
utelagazkodasSubmitted210 days ago(+1)

This is a good game!

-The difficulty was just right, in my opinion.

-The enemies, [DEADGAME] and the player look great.

-The levels were designed great, i really liked the bullet hell part where you are climbing the stairs near the end.

But i had some small problems with it.

-For example there was a random invisible block on one of the levels.

-This might sound a bit rude but the music was annoying, i mean im kinda biased cause i like playing games without sounds but i would have still liked a mute sound button built in the game.

-After exiting a dialogue and trying to jump after that opened the dialogue instead of jumping, there could have been a cooldown where you cant open the dialogue for some time, or can only reopen again if you walked away and walked back to [DEADNAME]