All's fair in love and war
Submitted by UrbanWolf — 1 hour, 28 minutes before the deadline
Add to collection 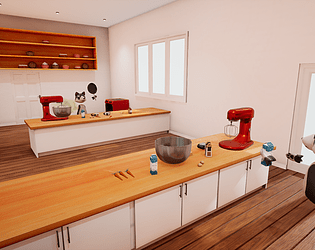 pull the trigger button to grab items
release trigger to drop and throw.

While Bunny is in the room make the cakes that she is requesting, when she leaves try to destroy your opponents baked goods by throwing items at them or direct to the opponents.

To set up multiplayer: Interact with host game button, interact with join button to join game. Only works with same network/local network.

When everyone is ready to play, push the ready button together on the each players own table to start game.

"Its valentines day and time to compete for your true love's affection!

Try to impress Bunny by making some of her favourite treats and earning love points.
The player with the most love points at the end of the time limit wins.
Earn points by following Bunny's recipe and placing the ingredients in the mixer. Lower your opponent's points by throwing things at their baked creations.
Be careful though, if Bunny see's you trying to destroy other player's treats she won't be happy and you will lose points instead! But when she's not in the room, anything is fair game.
even throw things to each other is fine.
Go fight for the heart of your special someBunny.

added : if it says fatal error when you open the game, then just open it again. it will work.

List any content that was created before the jam that was included in the final submission.
Wolf mesh, wolf texture, Half of Rabbit mesh (Mesh only)
ue4 marketplace blueprint item : throw helper