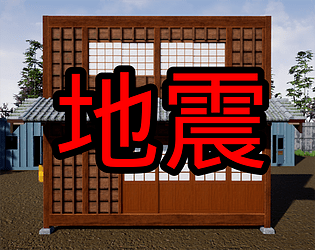 Gameplay Instructions
In this puzzle game you rebuild houses destroyed by the earthquake. The faster you rebuild the more coins you get. Five levels including a tutorial and two difficulties.

"At Jishin Constructions Ltd. we build Jishin , two sides of the same coin and, doing that, we generate more coins! Believe in yourself and overcome catastrophes." (In Japanese Jishin means both earthquake 地震 and self-confidence 自信)

IMPORTANT: After you grab a part press the "F" key, it will turn the part in the correct way.

If you're submitting to "ingenious" - please describe your innovative use of an asset.
Runtime building simulator made from Marketplace architectural assets (our own assets, but third-party assets could be used too)

List any content that was created before the jam that was included in the final submission.
See the game page for links and proper formatting :)))

MJH Modular Japanese Town House by Inu Games. The houses you need to rebuild in this game use assets from MJH Pack. In fact, they are from example levels provided with the pack (you can see them in this demo)
MSSR Modular Snap System Plugin by Inu Games. Used to calculate the possible placements of the parts. WIP, coming to the marketplace soon (editor version of this plugin is already published)

The sound of the earthquake from freesound.org (public domain).

All the other stuff is made during the jam. This includes the gameplay, UI, assets for the construction site (containers, fences, billboards, decals, etc.), tutorial actor, levels etc.