A VR Puzzler entry to the UE4 Spring Jam
Submitted by runeberg (@1runeberg) — 3 minutes, 28 seconds before the deadline
Add to collection 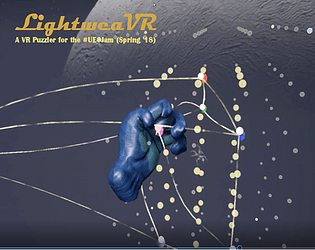 A VR Puzzler. Weave new patterns from old ones based on clues provided.

(NOTE: Video is a play-through and has spoilers)

Requirements/Pre-Requisites:
* VR-Ready PC (recommended at least a GPU of GTX 1070 & i5 proc or equivalent)
* Playtested with the Oculus Rift (with touch).
* Should however work with the Vive fine as touch control triggers/interactions were also mapped to ensure cross-compatibility (Check controls section for details)

To Start:
* Touch the center of the growing color tentacles in front of you.
* Listen to the voice prompts to get hints and/or look up ;)
* First puzzle text should get you acquainted with the rules, if you forget the hint it's
"make the pyramid the right side (point) up" - GOOD LUCK!

Objective:
Re-work the light threads in the Loom (puzzle Grid) to form a new shape indicated from in-game hints, by grabbing and moving the colored light swirls to the correct spots in the loom (yellow part only, gray are boundaries).

Use the corner colored spheres in the boundaries to act as an orientation guide (notice they match the colors of hte light swirls) ;)

Tips:
* If you're stuck, it helps to place the swirls outside the grid spreading them apart so you can visualize your planned weave pattern first before attempting to place them in the loom.

* If you look up, a text prompt will appear to provide hints on the current puzzle.

Controls:
Trigger to Grab Light shards/spheres - Take note of their color, threads attached to them for orientation.

All other assets and code were built specifically for the UE4 Jam.

List any content that was created before the jam that was included in the final submission.
RunebergVR Plugin (Marketplace & some assets from the GitHub Project, notably alien hands & moon with NASA provided texture)
Some SFX from last year's Epic MegaJam entry
Soundimage.org for main ambient sound