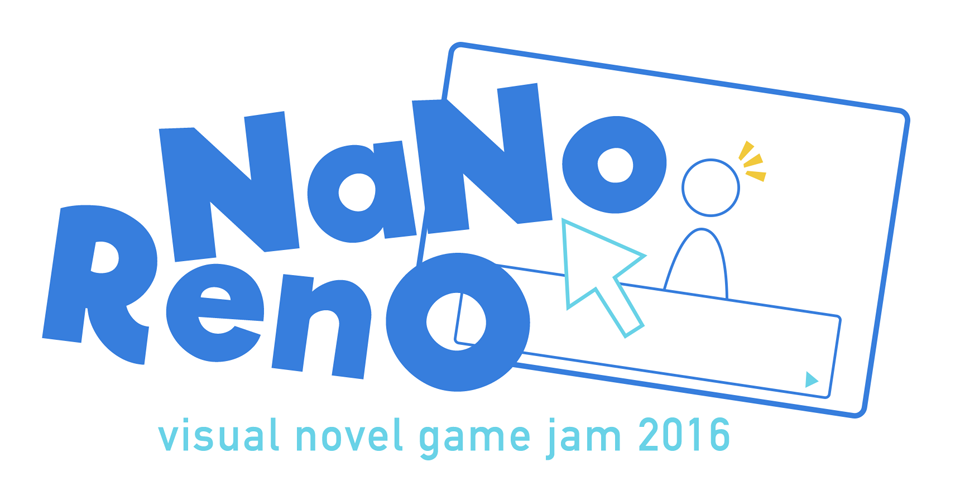 NOTE: If you want to submit your NaNoRenO VN to the itch.io jam page and it's past April 8th, please send Lore a message with your game's page URL and she will gladly generate a late submission key for you to do so. No judgment here.

NaNoRenO is a month-long game jam in which developers are challenged to make a visual novel from start to finish. It was originally inspired by the more famous NaNoWriMo (National Novelist Writer's Month, which takes place in November). There's no restrictions on content or genre. See a list of previously released NaNoRenO games here!

Many thanks to Deji for this year's logo!

Do I have to sign up anywhere to participate?

No, you do not have to sign up to participate in NaNoRenO, though you will more than likely get more out of the experience by joining the Lemmasoft forums and sharing the journey with the fellow participants there! Here is this year's general thread for NaNoRenO.

Is there a prize or any sort of judging?

There is no prize or judging in NaNoRenO. The event is a challenge that the developers set for themselves and the prize is the magnificent sense of gratification you get after finishing your game. Completion is its own reward.

Why should I participate in NaNoRenO?

Sometimes we need a fire lit under our butts. It's hard enough to get through making a game from start to finish without a time limit, let alone with just a month to get through everything. Having a deadline will motivate you, help you prioritize your time, let you work on a project you know should be finished by a certain point, and let you explore something outside of what you usually do. It's the same reason developers participate in game jams: a bit of fun with some time management thrown in. If you've had a visual novel idea lurking at the back of your head forever but never had the kick to go explore it—do it now!

The most recent phrasing of the NaNoRenO rules:

But what does NaNoRenO even stand for?

D-don't worry about it!!