A game about exploring, obsession, and death.
Submitted by OrionCanning (@OrionCanning)
Add to collection 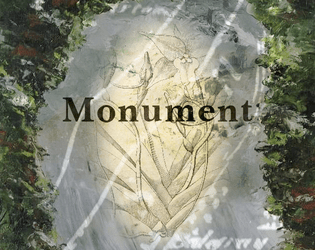 As you wrote in the review for Endtime, our games have something in common, so it's probably no wonder that we liked Monument straight away.
It instantly refers to a specific genre and develops it in an interesting way, not only inviting you to explore a faraway place, but the mysterious Explorer's obsession as well. A really neat touch, as are the memorials for dead characters.

Our advice is to always work with the flavor of the game to shape the characters: stuff like their initial description being played out as an interview wth the Explorer shouldn't be additional or optional, but a clear design choice to achieve a specific feeling.
On another note, we didn't exactly see the design goal of "a map with different portions belonging to different ages". We also think the game would feel more elegant if it didn't use two separate randomizers, cards and dice. If it was our game, we'd try to develop it so that it only uses cards.

Still, it's a really good game, with a lot of depth and complexity for the short amount of time you had to develop it, especially when you take layout and aesthetics into account.

Thanks for the kind words and advice! I wrote the game in a great rush on the evenings of the last two days of the jam. I didn't think I would have time because I was working on finishing an episode of a podcast about storygame design called All My Ideas Are Bad. But then at the last minute I decided to try anyways, because I already had come up with the idea in my head.

I agree about the interview, I can work that into character creation more, I think it could be very effective. As far as the  different portions of the map belonging to different ages, my interpretation of that wasn't completely literal. What I came up with was the idea of the known explored path, and the unexplored world, which aren't actually of different times necessarily, but would feel that way to explorers. It might actually become explicit in the story if the explorers come across ruins from another age. I may not have made that intention very clear.

As for the randomizers, I'm not sure what to think, I thought it might be interesting to  have the cards both a measure of supplies and and a randomizer for obstacles and their difficulty, and a separate randomizer for success, but there probably could be a more elegant way to only use cards. I'll think about how to do that for my next revision.

I was really impressed by the layout and work put into Endtime, I  think it definitely surpasses mine, which is actually more effort than I normally put into graphic design. It's not really my area of expertise but I tried my best with the time I had. I spent a lot of time looking at old paintings. I should also say that I actually had a hand in Fall of Magic as an early and frequent playtester and the designer of The Lost Island of Stillheart Landing. I also made videos for the crowdfunding campaigns for Fall of Magic and for The Quiet Year. So these games that are the prizes and maybe inspiration for the jam are close to my heart. Ross runs a meetup group here and I'd like to bring your game to run, I'm sure he'd like it.

Wow, just two nights. We barely made the deadline and we were completely drained, a team of two working simultaneously plus a dear friend that handled the translation and supported us in various other ways.
Thanks for telling us about your various engagements: Fall of Magic was a game we really appreciated for its ability to paint such an engaging fantasy journey with so few brushstrokes (and we have a friend to thank, he's in the acknowledgements for this very reason as well as a few others), whereas we haven't had the chance to try The Quiet Year yet. We'd be happy to know you played Endtime, both because all playtests are precious and because it'd be a pleasure to give something back to people who've gifted us hours of fun.