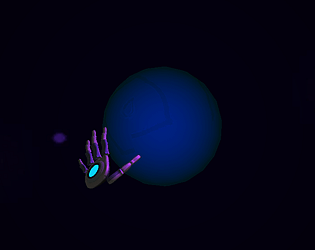 What's the name of your experience?
Galaxy Jam

Please describe your creation.
I wanted to create an interactive musical game that promotes a relaxing and casual experience. My vision was to make a musical performance possible by the player. Originally, I wanted to let the player build his or her own galaxy with more elements, but I ran out of time for the Leap Motion 3D Jam and just focused on one planet this round.​ The audio has much room for improvement to make it more interactive with smoother transitions. However, this is the first game I've built in Unity, and it's a start.

The type of the planet can be changed for different musical elements. Besides that, the color modifies the pitch of the base/ambient layer of the planet "music" in real-time. To achieve this, I implemented this game using FMOD Studio. The radius of the planet you can create/draw also determines what pitch it will start at when it is created. I hope it is not too subtle, but I didn't want to make it too obvious either.

Using gestures was an important part of this game, and it was a challenge to have them control the game without more detailed implementation. It took awhile to come up with this concept, but I knew I wanted to make a music "game", and once I thought of a theme (space), it occurred to me that the galaxy is visually beautiful and should be reflected in beautiful music. I worked with a composer to figure out how space might "sound" musically. Given more time, I hope I can improve the interactive elements with the gestures and implement the music more seamlessly.

Thank you for your kind words!!