Submitted by HonestDan (@honestdangames) — 25 minutes, 57 seconds before the deadline
Add to collection 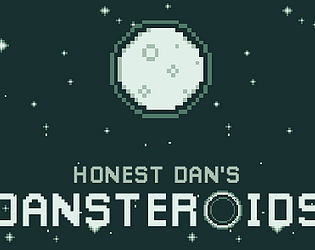 What was your theme you chose?!
"A puzzle game where you stack asteroids to make virtual money"

Any obstacles you found while working that were hard to overcome?
Scope. There were meant to be different shaped asteroids and purchase ship upgrades with Sbucks, but there was no time. The puzzle element was hard as the game board was allowed to be rotated, so working out how to keep positioning and the gameboard internal representation accurate when rotating the gameboard took some time. Animation queuing was a problem for me too, so hard to simplify.

Anything you had to ultimately cut from the game due to time or lack of knowledge?
There are 1, 2 and 3 entry pipes, designed for asteroids of different widths. That is implemented, but the different sized asteroids aren't implemented.
A config is implemented allowing you to customise your ship placing combinations of 1/2/3 pipes on all of your wings. But the system to build your own config wasn't implemented.
You were meant to be able to use your Sbucks to upgrade your energy usage efficiency etc, but again no time.

Do you think you will continue this project?
Yes <3 At least to implement different sized asteroids, and customisation of your ship.