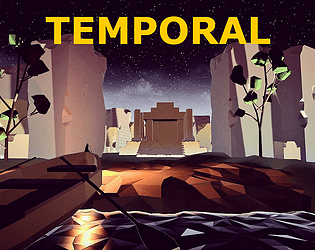 How was Houdini used in your game's development?
We used Houdini to make our rocks, pillars, and temple entrance by adding edge damage to simple blocked out versions, and then placed the rocks using Houdini. We generated our stone walls and created a procedural stairs model to create stairs of any size in the level.

Besides Houdini, what other tools did you use and what did you use them for?
- Unreal Engine 4 was used as our game engine for development and to block out the level

- Blender was used for modelling assets such as the boat, wall torch, torch pedestals, and watch

- Logic Pro was used for all sound/music creation and processing

List any content that was created before the jam that was included in the final submission.
- Arrow model
- Crackling fire sound
- Water material
- Tree model
- Dungeon ambience sound by Sword Coast Soundscapes
- Sounds from https://freesound.org/ as the basis for a few of the sound effects