a sprint to the exit, except you can't sprint
Submitted by Kenny Diedrich — 36 minutes, 28 seconds before the deadline
Add to collection 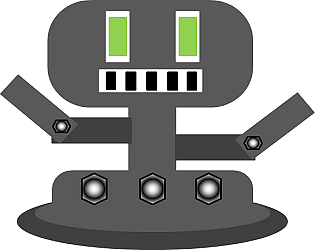 How does your submission match the theme?
I built this game on the idea of the counterplay between moving and not moving. Typically in games you are fairly unrestricted in your movements, with sprinting, jumping, crawling, flying, and other movements being available. I decided that with this game I would tie all your actions into the four directions you can move in.

The arrow keys are for moving, of course, but when you move you lose energy from the bar on the left (you ARE a defective robot, after all!). In order to regain energy, you have to stay still. But staying still causes the light you generate to expand outwards, notifying enemies of your presence. The only way to dim the light is to move, but of course, dimming the light also restricts your vision. You can attack, but there's no key bounded for it - instead, you have to move to charge up your attack and then stop moving to blast it in the direction you are facing. Although it's a long range attack, you have to be moving towards the opponent in order to actually direct it at them, causing you to close in. At the same time, though, enemies can drop valuable health upgrades, so you end up in a Doom-like situation where, in order to gain health, you perform risky attacks, usually at close-range.

Interesting game! I included it in my Game Maker Toolkit’s Game Jam compilation video series, if you’d like to take a look. :)