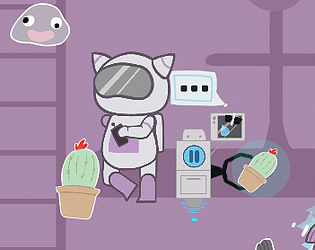 Love this design a lot. The character and prop art you have so far is great.

- It's very counterintuitive that you have to release the mouse to pick things up. Nobody will expect that - what they'll expect is either click to pick up, or click-and-hold to pick up. I get why you did it this way - it's because you need to make sure the player has released the mouse in order to detect when they click to start 'charging' their throw. But I don't think it's the right solution - even if you want to keep this throwing input scheme, you can still do it with 'click to pick up' - just ignore the first mouse-up event after they pick up the object.

- You can tutorialize picking up by having 'hand open' and 'hand closed' art - make the hand close when the player clicks, even if they aren't clicking on anything.

- To tutorialize the charge-throw mechanic you will need to make a much bigger deal of the charge arrow and have a good 'building up' sound effect.

- I started to want some things that needed me to throw an object, like buttons to open doors, something like that. Maybe an annoying NPC you can throw stuff at.