On Mars, nobody can hear you poop. Except your boyfriend.
Submitted by Aika (@aikamcslut)
Add to collection 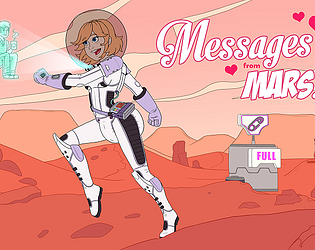 I had not expected anything built to this level of quality in the contest! And built in unity? Also an impressive undertaking! It has great polish. Even the scaling of the difficulty felt very natural. Challenging yet with a feeling of being manageable with a bit of concentration.

There were a few points that troubled me though. The interface didn't seem to like my setup when it came to navigating the map.  The gameplay was REALLY repetitive, same wrenches, same floor.  Could have used some obstacles to change up the room you dodge in.  But I feel for a 1 month game all this can easily be overlooked, and do not diminish its enjoyment.

My biggest issue was the theme. The romance aspect just seemed missing. Maybe the path I ended up taking didn't have the romance... But the feeling of love was lost on me. Romance is a feeling of excitement and mystery associated with love. If anything it felt more sexual or lust based than love based. Foreplay rather than unconditional support. It became a dom/sub relationship more than a loving romantic one. I realize that dom/sub can ALSO be romantic, but in this case it felt more like one replacing the other.

Still it is an excellent game, and one that looks very well done for a one month contest! Also loved the mechanical aspect of the diaper changes >..>