The only command that you need to remember is butler push

Channel names will determine the initial set of tags of a slot, but you can always fix them later.

If you push the same directory twice:

These are two extreme cases — most of the time, you'll be somewhere in the middle, with maybe 5% to 20% fresh data in a push, saving 80% to 95% (more with compression) of your data/time/internet bandwidth.

Note: the first push is a patch too (from the empty container to the first version of your game). It has savings as well, because butler uploads compressed data: you could be pushing a 300MB build but only sending 120MB over the network.

Pushing to a new channel will make a corresponding file appear on your game's page: 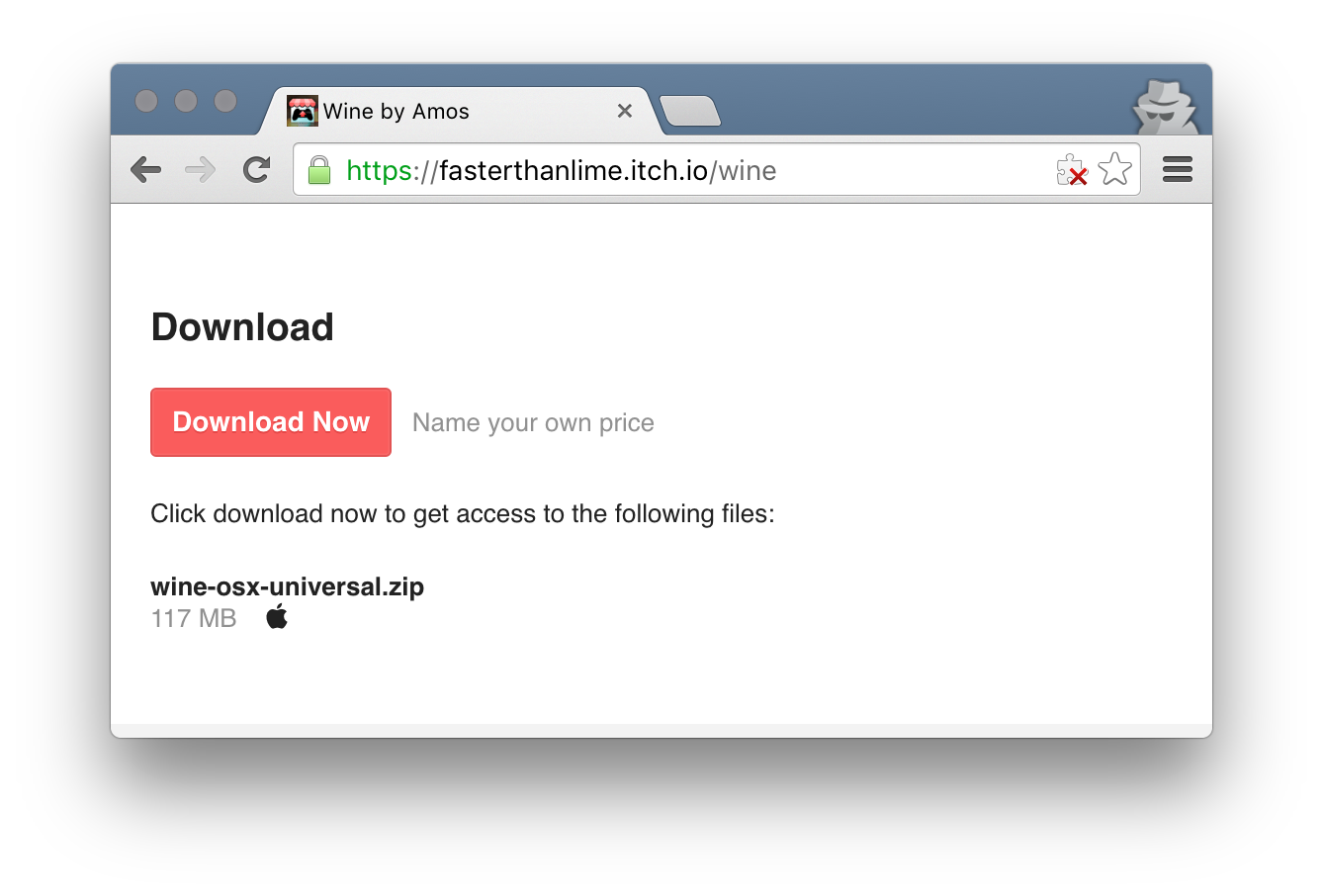 Pushing to the same channel again will update that file, once the build is processed.

Limits: currently, the itch.io backend will reject builds with a total uncompressed size that exceeds 30GB.

The name of a channel has meaning:

Limits: there is no way to tag channels with architecture (32-bit vs 64-bit) yet.

The general convention for channel names is: lower-case characters, separated by dashes (aka. kebab-case).

Naming your channel correctly will ensure your build is probably tagged from the get-go. However, you can always change it later from the Edit game page, by using the checkboxes. 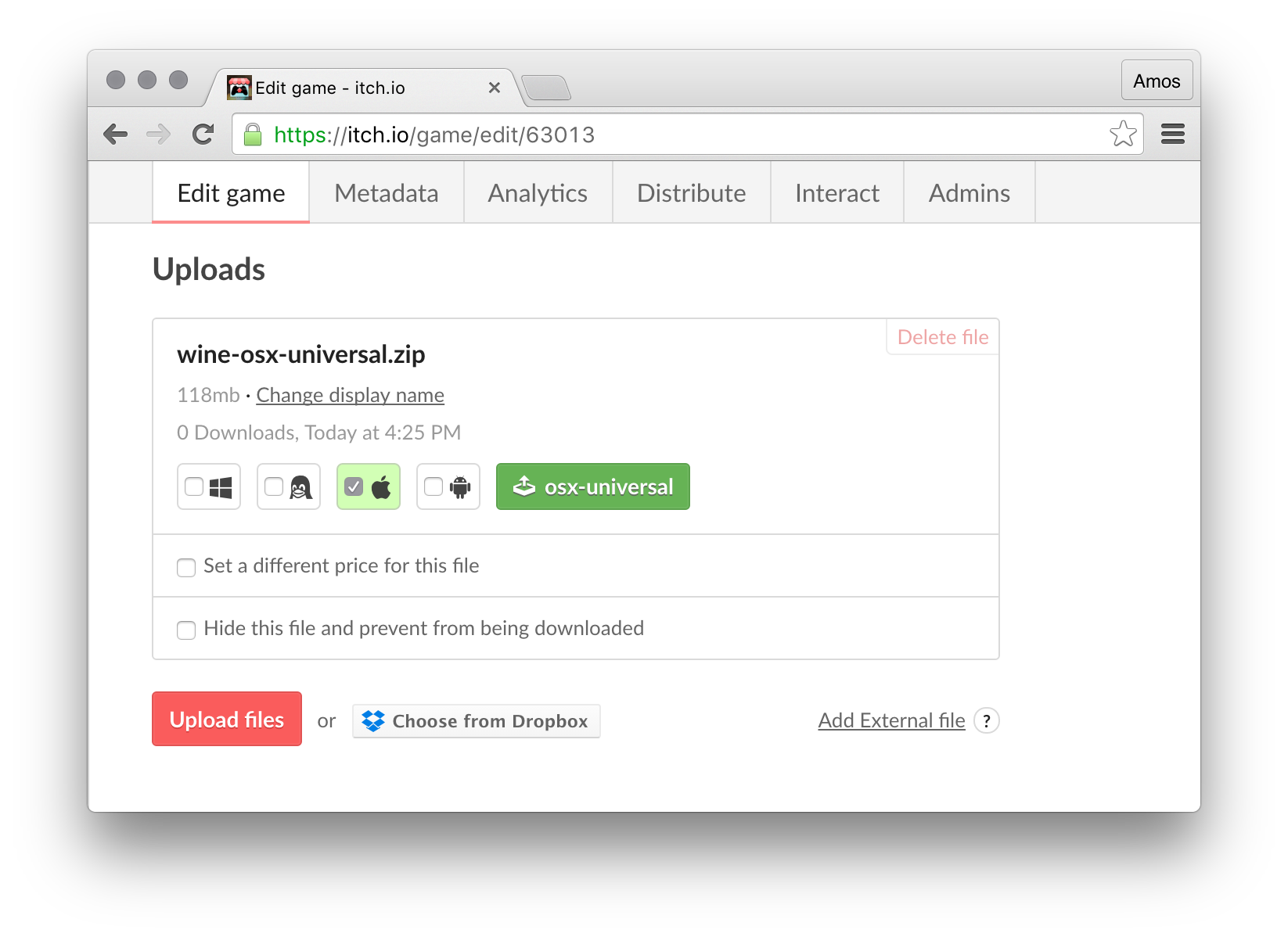 Don't forget to Save the game's page to apply your changes.

Clicking on the green channel button will show a list of builds and their current status.

Tagging a channel as 'HTML5 / Playable in browser' needs to be done from the itch.io Edit game page, once the first build is pushed.

The page also needs to be set to 'HTML' rather than the default 'Downloadable'.

Specifying your own version number

By default, the itch.io backend will generate a constantly-increasing integer version number for your builds, for each channel.

However, if you're already generating your own build number, you should pass it to butler with the --userversion option:

You can also instruct butler to read the version number from a given file, if it fits your workflow better:

The buildnumber.txt file should contain a single line with the version or build number, in UTF-8 without BOM.

User-provided version numbers don't have any particular format - the ordering itch.io uses is the one builds are uploaded in.

Players who prefer downloading directly rather than using the itch app don't get automatic updates. You can use the following API endpoint to query the latest version of a game and notify your players from within the game, that a new version is available:

Response: a JSON object with the latest user-version for the given channel:

If the latest build doesn't have a user-version, the latest field will not be present.

(You can find the game_id from the Edit game page's address)

Note: if the game's visibility level is set to Private, this endpoint will return the error 'invalid game', to avoid potentially leaking information about unreleased games.

Appendix A: Understanding the progress bar

butler push does a lot of work, most of it in parallel:

Neither of these bars jump back. The half-tone bar may pause, waiting for the full bar bar to catch up: this means butler is waiting to send the patch data it has already generated before scanning more files, and it helps keeping memory usage reasonable.

The estimated time remaining is to be taken with a grain of salt, as are all ETAs.

The default windows command-line uses a character set named Code page 437. Its historical relevance goes back to the days where Unicode wasn't yet ubiquitous.1

In the early days of butler, we were using the CP437 character 007 to display bullet points (whenever butler starts a new task). However, that particular character is also used to emit a system beep2.

This was a bug, of course, but early users got attached to it. It was soothing. The bug has since been fixed, but the historical behavior can be restored by using the --beeps4life option.

Note that this option is not listed in the program's inline help.

The recommended way to use butler push is to pass it a folder that is exactly your release build, with no extra files. For example, if your build process generates *.pdb files, and you don't want to push that - create a copy of the build folder without them, or just remove them from the build folder before pushing.

However, because it is hard to resist feature requests, butler supports the --ignore flag, which lets you push a folder without some files.

Here are the rules:

For example, if you wanted to ignore all .pdb and .dSYM files, you would do something like:

As mentioned in Appendix C, we really really recommend that the folder you push is the final version of your build folder, with no changes.

However, because saying no to feature requests requires more strength than it does implementing said features sometimes, there is a way to push a folder with symlinks in it as if those symlinks were copies of the folder/files they refer to.

So let's say you have:

Then you could do:

It's not that the builds you push won't work, it's that they'll include several copies of the same file, and thus be larger than needed.

Appendix E: Pushing only if changed

Most times, you want to push unconditionally - even if nothing changed, just so that there are consistent version numbers across, say, Windows, macOS & Linux.

But sometimes, you might be pushing to a bunch of project pages / channels, and you want to avoid generate empty/no-op patches. The --if-changed flag lets you not push anything if the contents on disk are exactly the same as the latest build.

To give you an example use case, this is used when updating https://itchio.itch.io/itch-redists. Each upload on that page is a file in a git repository, and they're all deployed in the same CI pipeline. Typically only one or two channels actually get changed, and --if-changed reduces patching noise.

2. Historically, from your computer's PC speaker. Now, probably whatever sound Microsoft bundles with your version of Windows. ↩