You can download stable and bleeding-edge builds of butler from its itch.io page:

Better yet, you can install it using the itch app, so it stays up-to-date.

You can download the latest, bleeding-edge version of butler from broth:

broth is the download server used by the desktop app to install its own copy of butler.

The -head channels are bleeding-edge, the other ones are stable.

This is recommended if you need to install butler as part of a script, perhaps for continuous deployment

If you want to get the latest stable, for example, you could curl or wget the following URL:

You can substitute linux-amd64 with any channel listed on broth.

The file served is a .zip file, and this URL redirects to an expiring download URL. Here's an example bash script to install the latest stable butler for Linux:

Note: the .zip file contains the butler executable, along with two dynamic libraries related to 7-zip, which grant butler extra functionality. They're not strictly required for butler push, however, they shouldn't hurt either.

If you need help integrating butler in your CI pipeline, butler's GitHub issue tracker is a good place to ask: https://github.com/itchio/butler/issues/

Adding butler to your path

Adding an executable to your path allows you to launch it from anywhere, no matter which directory you're currently in.

Follow this article to add the folder where you downloaded butler.exe to your path.

Alternatively, Windows will look into the current working directory when looking for commands

If you extracted butler to a directory (let's say ~/bin), you first need to mark it as executable. From a terminal, run:

Then, edit the ~/.bashrc file (~ is your home directory) and add this line at the end:

You'll need to close and start a new terminal to apply the changes. You should now be able to move on to the First run section.

Alternatively, if you want to use the version installed by the itch app, you can skip the chmod command and use this line in your ~/.bashrc instead:

(don't forget the double-quotes, they're needed because there is a space in Application Support)

As with Linux, don't forget to close and re-open your terminal to apply the changes.

To make sure butler is installed properly, open a terminal (cmd.exe on Windows), and type the following command:

Or if you're using a stable version, head will be replaced by a semantic version number.

Here's how it looks on Windows: 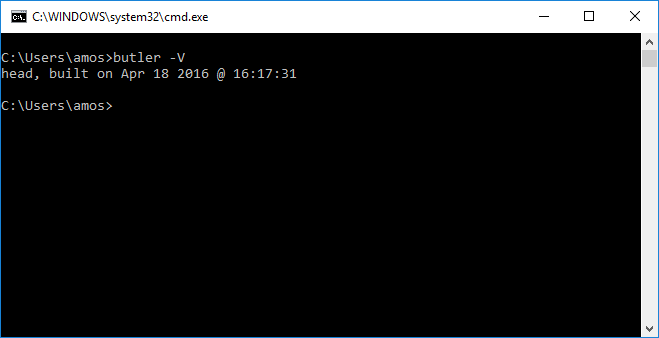 Note: of course, you can also run butler from PowerShell. But if you know about PowerShell you probably didn't need to read most of this page anyway.

If you ever forget where you put your butler.exe, the butler which command will print its complete path.

Appendix: What happened to dl.itch.ovh ?

If you followed these instructions before September 2018, you might have download URLs starting with dl.itch.ovh. While new versions of butler are still being deployed to that server for the time being, it is deprecated and new CI setups should use the latest broth.itch.ovh URLs instead.

dl.itch.ovh was a simple storage bucket with a proxy in front. It did the job, but some users were unable to access it, and download speeds were sometimes suboptimal for non-US users. broth.itch.ovh serves downloads through itch.io's CDN, which means every should have access and reasonable download speeds.

Additionally, dl.itch.ovh served "naked binaries", whereas broth.itch.ovh now serves .zip archives, because the full butler distribution is more than one file. See the install instructions above for what these files are, and example bash code on how to install butler from broth.