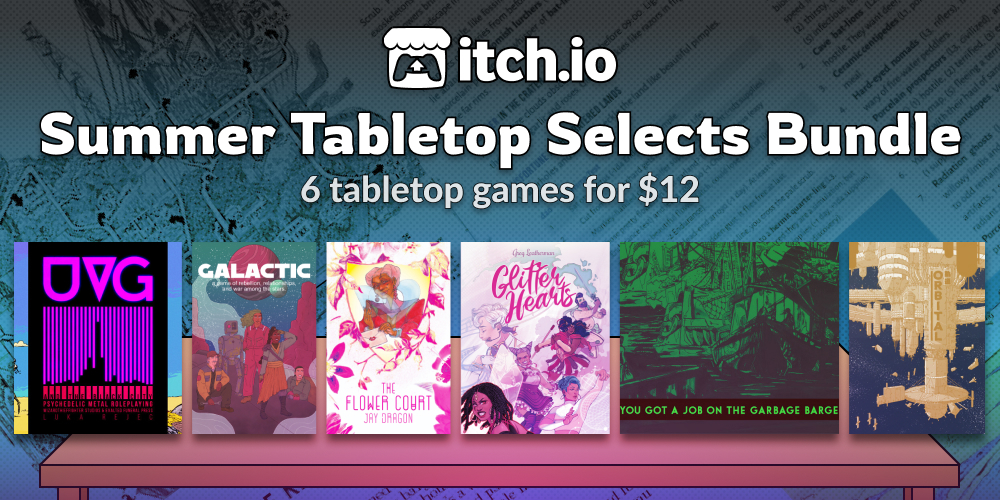 Celebrate summer (in the northern hemisphere) with a bunch of great tabletop experiences!

For just $12 you get the following tabletop RPGS: 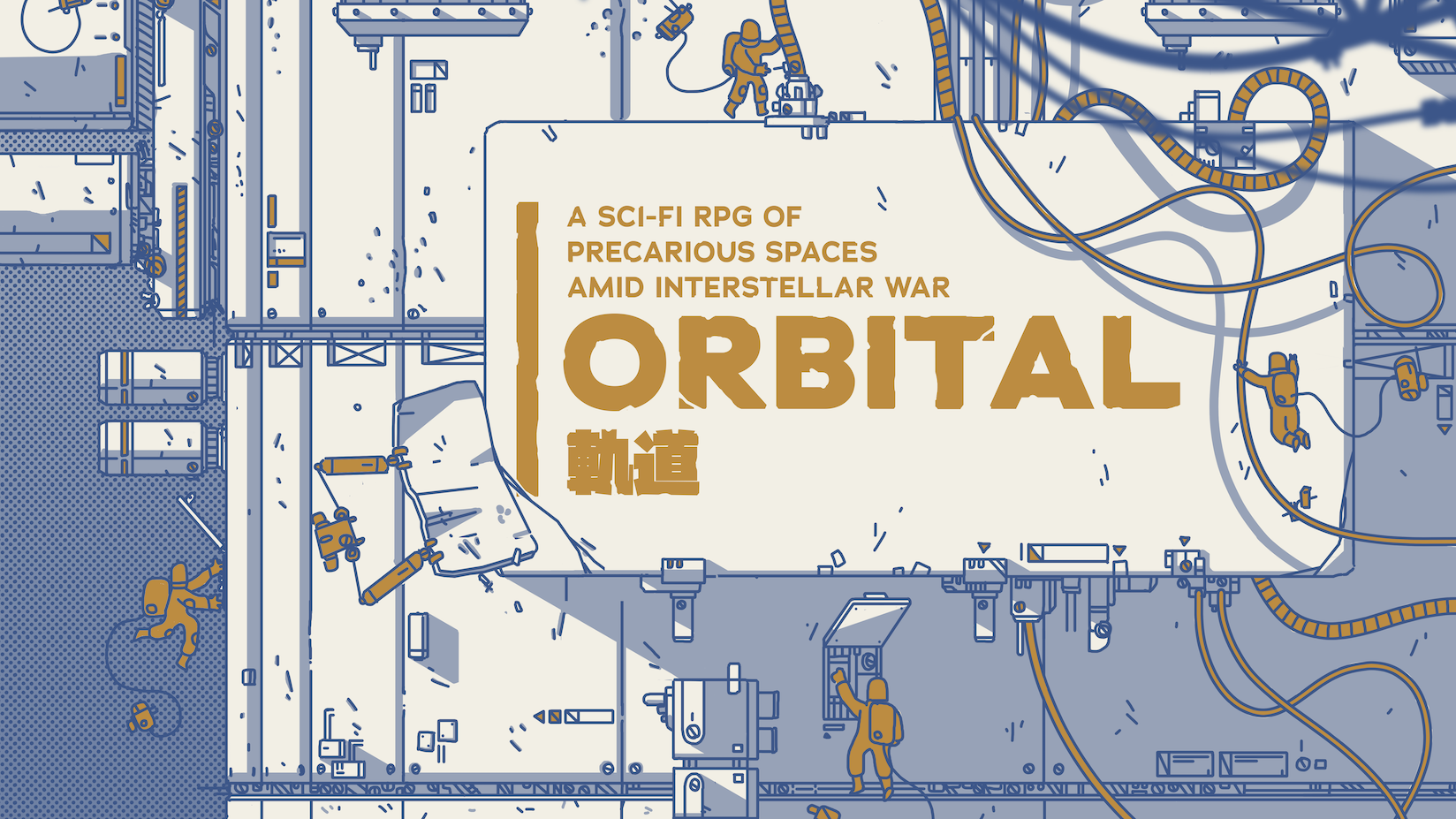 When the universe is at war sometimes you just want to stay out of it. In Orbital you and your party are on an unaffiliated space station in a galaxy-spanning war trying desperately to stay out of it. You’re on the fringes and want to keep it that way despite the universe’s insistence otherwise. To make things even more interesting Orbital uses the No Dice, No Masters system so you and your friends are all going to be playing both characters and some of the typical GM responsibilities. Sounds great, right? 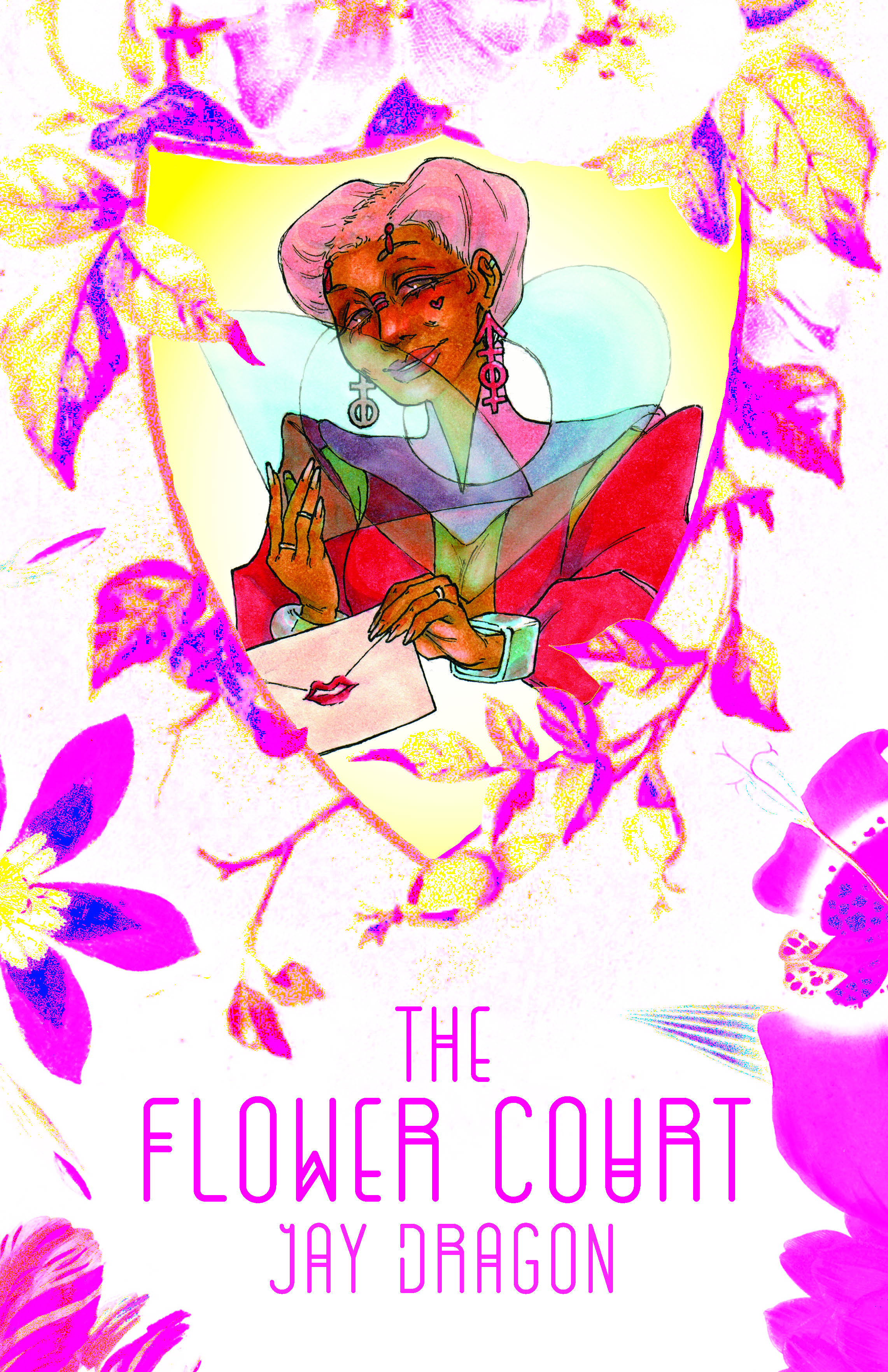 The world would be better if it was run by pop stars, right? Well, sort of-- but it would definitely be more fun! Flower Court takes this idea of a world owned by popstars and turns everything up to the max. This isn’t a hacking-and-slashing RPG, the world of Flower Court is all about political intrigue, drama, backstabbing, and even more drama.

Get ready to flirt for your life in this game that asks “what if Carly Rae Jepsen starred in Sci-fi Bridgerton?” 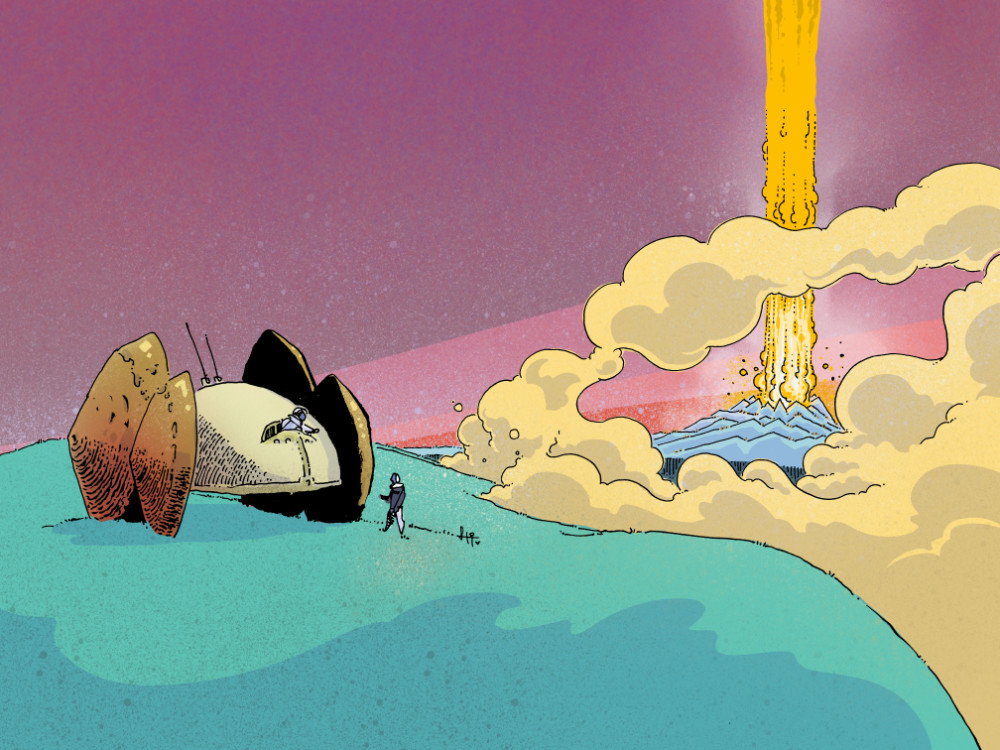 Ultraviolet Grasslands and the Black City

Have the previous games been just too normal for you? Well step into the world of Ultraviolet Grasslands, an entire setting and ruleset inspired by psych metal. This strange game brings in the beauty in the surreal and promises a campaign unlike any other. To sweeten the deal Ultraviolet Grasslands was designed to be ported as easily as possible to any ruleset you’re already running. 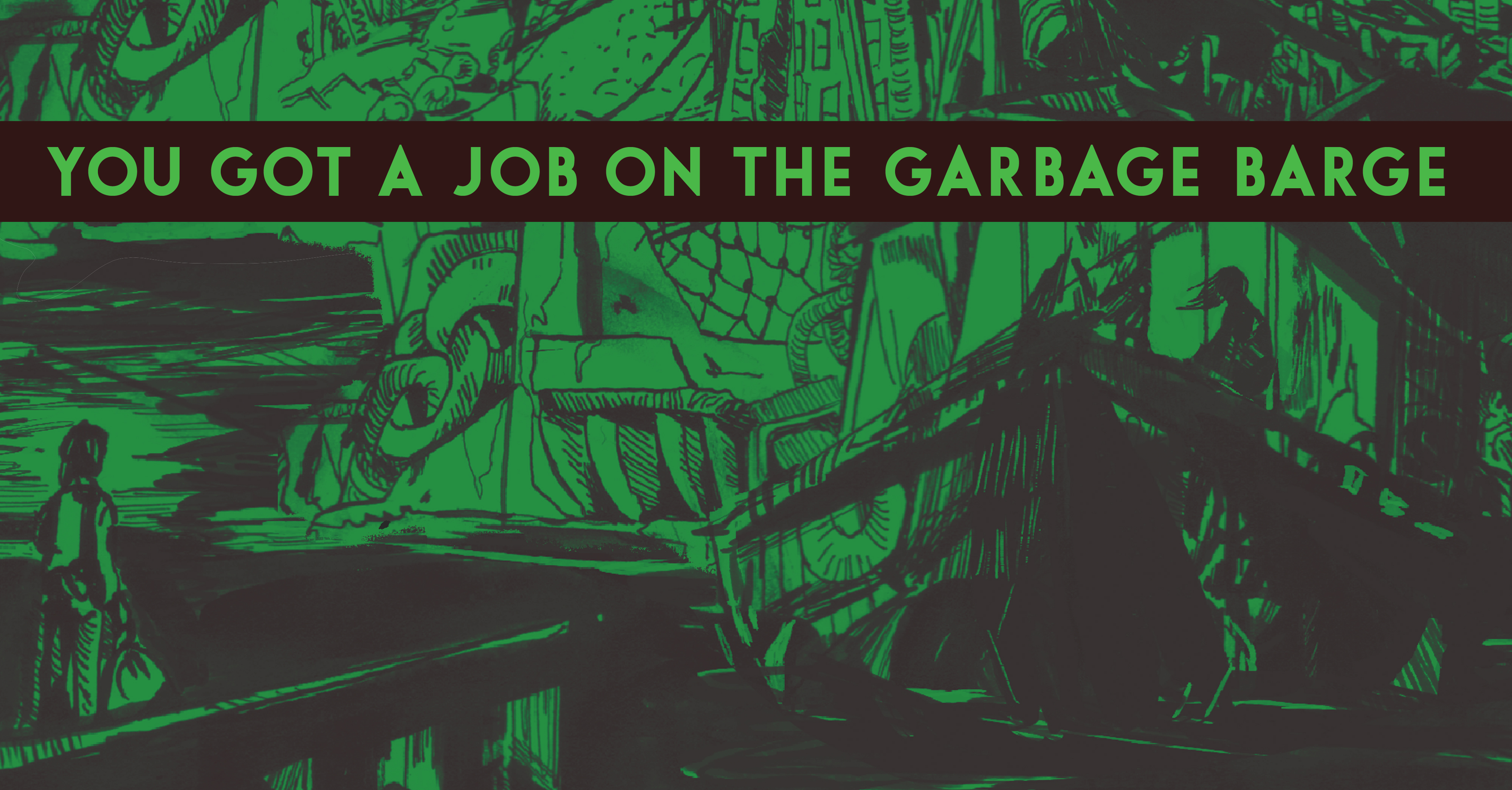 You got a job on the Garbage Barge

I get it, sometimes you need to send your characters on a pleasant vacation after a hard adventure. If that’s the case, can I interest you in spending time on a massive, dubiously haunted garbage barge? This OSR setting (adaptable to whatever system you’re playing on) is ready for all kinds of wacky antics from handling everyone’s favorite trash animals to a variety of smells that your GM will have fun trying to describe.

If you’ve ever wished your campaign had more garbage, you have to check this one out. 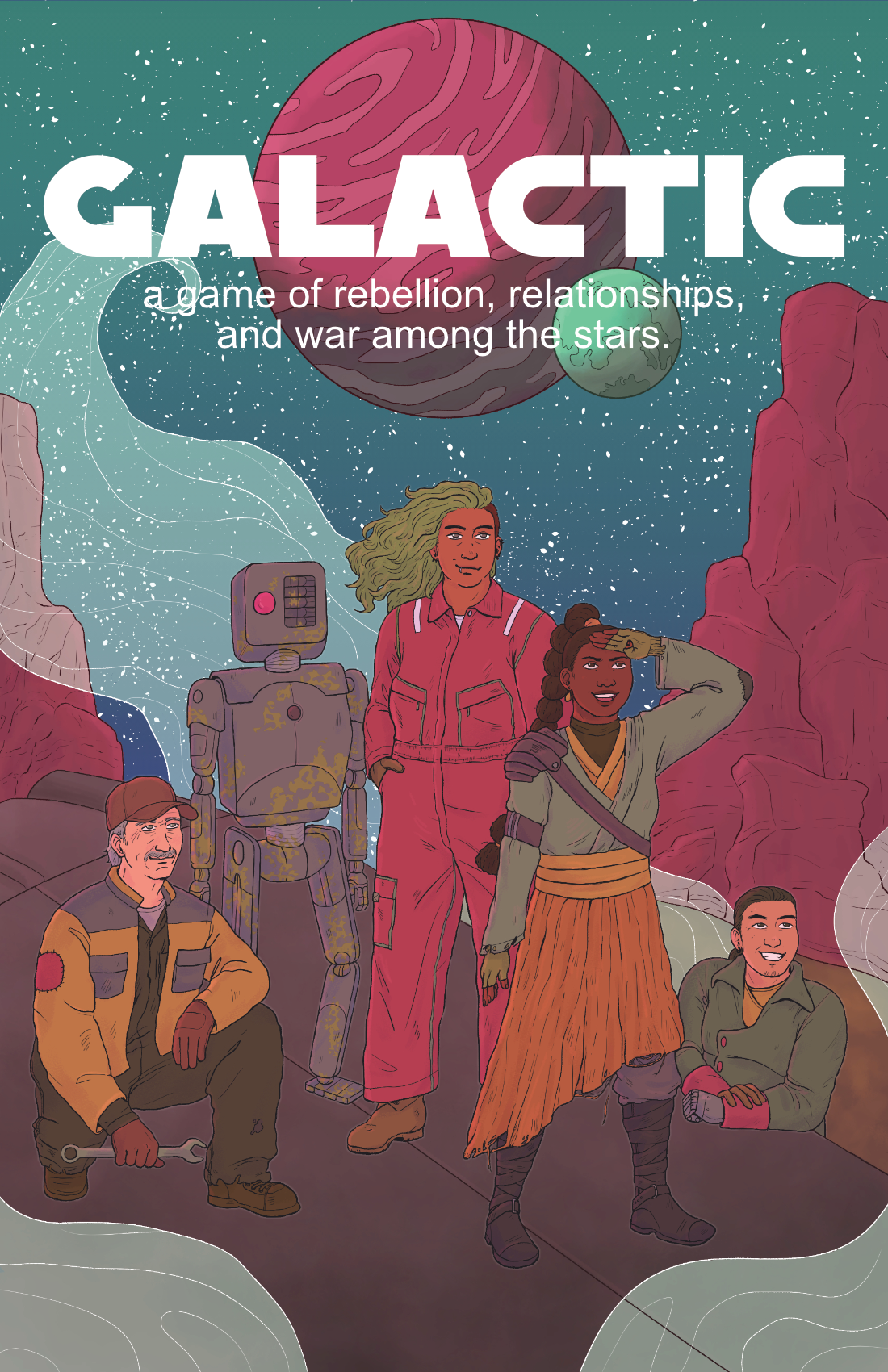 Take your friends on a legally distinct space adventure with the awesome 2nd edition of Galactic! You and your crew of misfits are adrift in the middle of a galaxy-spanning space opera where anything is possible. Fans of the world’s largest sci-fi film franchise will know exactly what’s going on here.

Build a cast of weirdos with your friends and go on the run in an adventure you’ll never forget. 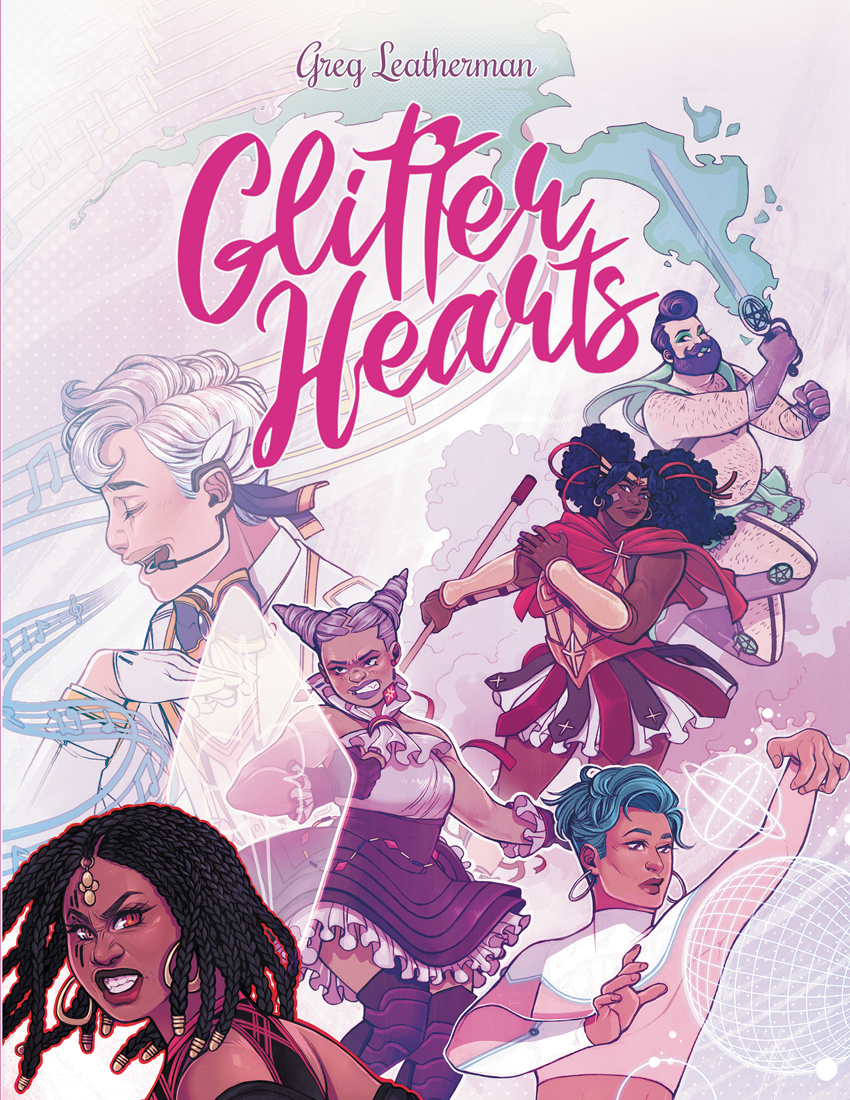 Let’s round this bundle out with some magic. Glitter hearts is the gender-inclusive magical girl game you’ve been waiting for. Play both halves of the genre where you’re managing your everyday life before transforming to take on the problems that plague your city. With over 150 different moves to choose from you can build your character in the exact way you want and live your most powerful life. Everyone can be a hero with a touch of magic and some help from their friends.

Ultraviolet Grasslands and the Black City
A long strange trip through the grasslands of the long long ago.
WTF Studio
galactic 2e
a game of rebellion, relationships, and war among the stars.
riley rethal
The Flower Court
A post-cyberpunk pop diva political intrigue / matchmaking RPG.
Jay Dragon @ Possum Creek Games
Glitter Hearts
A magical transforming heroes RPG.
Greg L
YOU GOT A JOB ON THE GARBAGE BARGE
an osr style setting, adventure, and 100 kinds of trash
amandalee
ORBITAL
A sci-fi RPG of precarious spaces amid interstellar war.
Jack Harrison