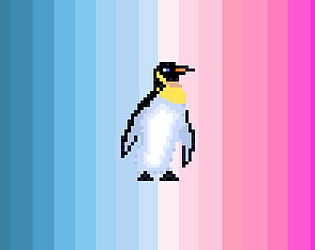 Please list any pre-made art/music/code/other assets that you used.
Nope

There's a couple of issues I see, but this definitely has a lot of potential. Here's the stuff I think could be improved:

-The first thing the tutorial should mention is that you can rewind. This is a critical mechanic, and honestly, I almost gave up when I fell into the tutorial-pit and had a hard time getting out. If you know that you can rewind, though, it's a lot less frustrating. Honestly, I'd like to see features like this in more games.
-The rewind function is pretty buggy. It doesn't properly account for momentum or direction. This can be especially annoying when you mess up a jump and have to go back to the other side of the room to hit the wall so you can try again. However, the weirdness with the rewind does actually result in some fun scenarios sometimes- If you tried to use this intentionally and refined it, it could create some pretty cool mechanics, in this game or a sequel.
-There's not much indication of how powerful your jump is going to be. There seems to be around 3 frames of animation that play out at the start of the jump, but it keeps charging long after that. I'd suggesting either adding more frames as it charges more, or for a simple solution, simply "stretching out" the existing animation for the duration of the jump's charging period.
-The penguin looks really good, but most of the other graphics are pretty simple. That's not necessarily a bad thing, and doing a lot of graphics can be really time-consuming, but I would suggest at least adding a background, even if it's just a gradient or something. As it is, the levels feel kind of empty.

Aside from those things, I had quite a bit of fun with the game, the mechanics are simple but enjoyable, and as I mentioned, the rewind function means I didn't get frustrated when I had trouble getting past part of a level. Losing progress is one of my least favorite things in games, and this game completely avoids it. I'd love to play an updated version or a sequel. You mentioned that you might add more levels, and I'd be happy to play them, especially if you can improve some of the stuff I listed above.
Also, the twist at the end got me pretty good- It certainly fits the "Unexpected" theme!

I love the idea (or bug) of revind being the cruicial part of beating the level!

Great idea, a one-button platformer. Very innovative, visuals were great and the mechanics were well executed. The challenge in the level may appeal to hardcore gamers. As a casual pc gamer though, the game was very frustrating so for me the difficulty did not translate into a fun experience. With audio cues, easing the level design think this could be pretty enjoyable to play. The art is great, excellent palette.

This overall a simple and fun little game idea. I wish the player could rotate the penguin, and I would like some kind of indicator on how much jumping power you have added. Overall is this a pretty good jam game.

Submitted
This Is Not
LikeReply
Interjace307 days ago

Overall: This was super fun and also super frustrating but I could definitely imagine playing a longer version of this game. However I nearly tore my hair out whenever I got really far and then I accidentally turned and I needed to jump all the way back to change my direction back again. Still somehow I liked that, it made me have to think through my choices as I jump, so maybe if there are more spots once you get up on the surface to change your direction?

Unexpectedness: I definitely didn't expect that I (Cher voice) could turn back time, but wasn't that written in the instructions below the game?

Gameplay innovation: Definitely never seen anything like this before. Love the ways you could use the timetravelling properties to your advantage. It felt like a strategic game in the ways you had to think through your choices before you make them.

Fun: Definitely one of my favorites from this jam, except when I was at the top and I kept accidentally turning myself the wrong direction and I had to jump back and fix it.

Visuals: It was pretty and I loved the look of the penguin! If you make the rest in a similar style this game would be GORGEOUS.

Audio: I'm missing some music in this game!

I don’t know if it’s intentional, but I can’t seem to find a way to change direction except when hitting a wall, which makes the game almost impossible. Also, is there audio in the game? I can’t hear any.

But if not for that it looks like a really fun game, the graphics are nice and the rewinding mechanics is great!

+1 to the game not loading, looking forward to playing whenever you get the chance to rue-load

LikeReply
Opossum In A JarSubmitted312 days ago

I come back occasionally hoping we will get a fix! Try to reupload, I really want to play your game, especially since it is your first one!

The game doesn't load for me :/

LikeReply
Lets go to the grindhouseSubmitted314 days ago

Submitted
The Boy in the Dark
LikeReply
savorryDeveloper308 days ago

the game wont load for me =/

get stuck on the unity splash page, coudnt play

Hhahah i like it, need a bit of feedback maybe, but is hard and frustrating and that is a good thing. I dont know how much the rewind add to the game, the jumping mechanics is enough to make this fun =)

Sorry but it didn't manage to load on my browser. (using Chrome)