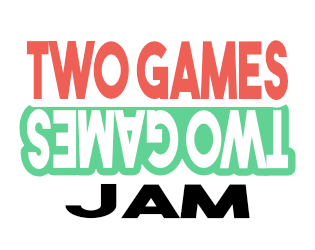 Make two games for one jam

What is this jam?

This jam is about making two games for one jam. How you interpret that is up to you, so you can be as creative as you want.

Some examples of how to interpret this:

Of course, these are just examples, you're more than welcome to make up your own interpretation.

If you want to ask me things, look for a group, or ask for feedback, join the Discord:

Wait, so how do I submit?

There are two options for submitting:

After the submission deadline ends, you will be unable to upload any updates or additional files until voting ends.

Since itch's rating system isn't really designed for combining submissions, the results will be announced manually.

Are there any themes?

The OPTIONAL theme is:

Don't put any NSFW content in your submissions, be it in the game or on its pages.

As with most game jams, the whole idea is that you make a game during the jam (or two in this case). Meaning that preferably every asset and bit of code is created during the jam, though this is not a requirement. For fairness' sake, please indicate which elements used in your games were NOT made during the jam and give credit for those not made by your team.

Other than that, you can really do whatever you want. Make your games in whatever engine you want, build your own if you must; In a team or solo; Use 2D, 3D, 2.5D, 1D, or 4D graphics; Make a game using only sounds! Heck, the games don't even have to be digital, if you'd prefer, you are more than welcome to make a physical game.

As long as everything needed to play can be gathered from your submission page, you're good to go!

As such, you can also submit your games to multiple jams at the same time. (As long as the rules for that jam also allow it)

Though in any case, if you want your game to be played, I recommend you create at least a version for web and for Windows.

No prizes aside from my praise, the additional promotion of being in a jam, and the satisfaction of a job well done.

Submissions are ranked on the following aspects:

Voting can be done by anyone, so make sure to play, comment on, and rate the games made by the other jammers.