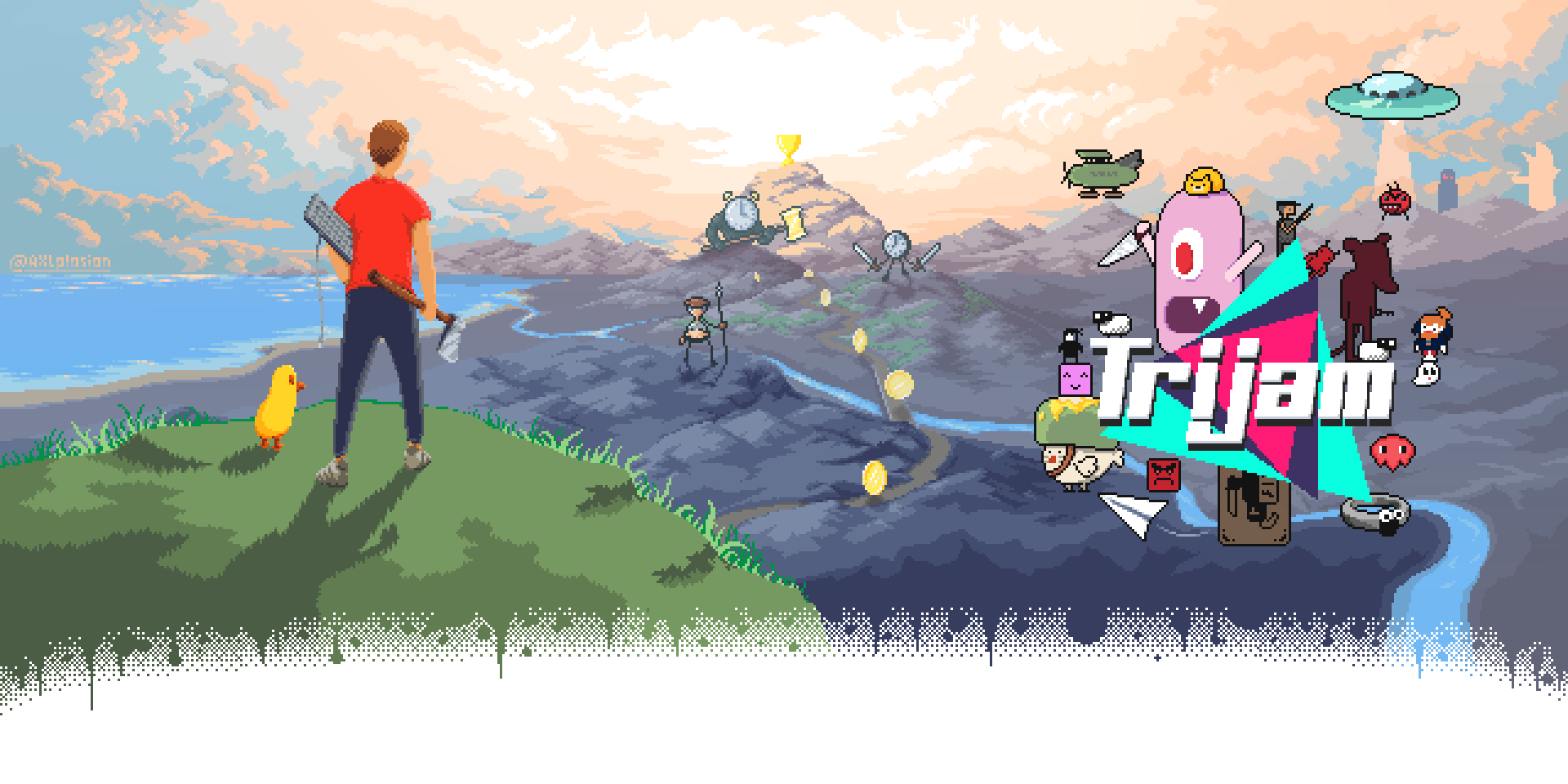 In this special edition of Trijam, make a game in 3 hours... then update it in 3 more hours... then make a third build in a final 3 hours!

Check out the special announcement video!

Submit a browser-playable version for the best results! If not, try to submit both Windows and Linux versions!

Trijam is a jam where your goal is to try and make something playable (and fun) in only 3 hours! How is that even possible, you ask? Well, just look at the history of previous Trijams and we're sure you'll be convinced that it is not only possible, but very manageable!

Triple Trijam gives you 3 hours for an initial game build, 3 hours for a second build, and 3 hours for a final build, for a total of 9 hours! 9 HOURS! Furthermore, there will be 3 themes this time you can choose from.

To be clear: you should be uploading 3 different builds of your game to your itch.io game page! A build for every 3 hours you worked on it, giving a nice little progression of development! You should submit one project, with at least 3 builds uploaded to it. For example, you may have three Windows builds, one for each 3 hours of development, and then a Web build of the last version. The more builds the better!

This is info about regular Trijam if interested. Most of the stuff still applies.

What are the rules?

Pretty much do whatever you want! The time for coming up with an idea, making a design doc, compiling the game, publishing it, etc. does not count in the 9 hours you have, that time is purely for development of the product. You can also split your 9 hours into whatever chunks you want (as long as you compile a new build every 3 hours!), so it doesn't need to be 9 hours straight, e.g. you can take 2 days working on your game, working on it however many hours each day. If your game took longer than 9 hours to make, that is completely fine, just specify so in the game's description. It will still be played, but will not compete for 1st place in the jam.

Of course, have common sense when making your games. Making intentionally offensive stuff is a no-go and will most likely be voted out of the competition. Also, please specify if your game is NSFW so that we don't get in trouble for streaming it.

If you work with others on your game, make sure to add them as contributors to the game's itch.io page! To do this:

Triple Trijam will have three themes for you to choose from! You can use any one of these themes, or choose two of them, or incorporate all three! Using a theme is ultimately optional, but theme usage is a voting criteria, so if you want to get the best score within the jam, you should use as many themes as you can, incorporated into the gameplay, art, story, anything and everything you can!

You are free to interpret the themes however you want! Call out which themes you used and how on your game's itch.io page!

Themes will be announced via itch.io on this page, email to all participants, the Trijam Discord, and Twitter with #Trijam. You can't miss them!

Diversifiers are a great way to add a little more fun or challenge to your jam weekend. Sometimes they can be very helpful to limit your scope or refine your ideas. They are totally optional constraints you can choose to add to your Triple Trijam game alongside the main focus of the themes. You can apply as many or as few as you'd like! There will be a bonus voting criteria for use of diversifiers, but don't stress about following these if they don't inspire you!

It's best to pick only a couple of diversifiers (if you decide to use any!) and focus on those few. It would be pretty impossible to use all of them!

If you use any diversifiers, say which ones you used and how on your game's itch.io page!

After the jam's submission period ends, there will be a voting period where everyone who submitted a game can rate the games!

You must submit a game or be marked as a contributor on a submitted game in order to vote—this is to prevent cheating!

The games will be rated from 1 star to 5 stars on the following criteria:

If your final game build was made in a time longer than 9 hours, you will not be eligible to win first place.

There is no reward for first place or any particular ranking other than your own satisfaction and bragging rights!

For voters: vote with whatever scale you like. Whatever means a 1/5 or a 3/5 or a 5/5 to you is perfectly fine. If no game is a 5/5 for Visuals for you, that's fine! Just be sure to rate every game with the same set of standards.

Gunnar Clovis will record a video playtesting your game and giving individual feedback on your game in his Itchy for Jam series on his YouTube channel. Your game will be included in his Featured on Itchy for Jam collection on itch.io. Gunnar needs a Windows or Browser-playable version (i.e., HTML5 or WebGL) of your game in order to make a video on it.

RocknightStudios will livestream playtesting your games on Twitch on Wednesday following the jam. Rocknight needs a Linux or Browser-playable version (i.e., HTML5 or WebGL) of your game in order to play it on-stream.

Join the community Discord for Trijam and Asset Jam!

Check Out the Trijam 2019 Showcase!