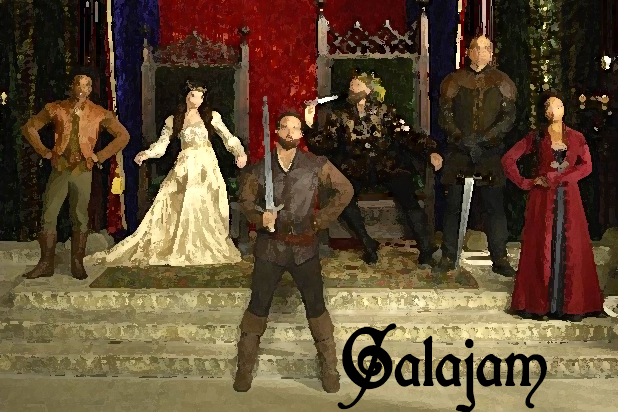 They didn't get a series 3, but the music lives on

Your noble quest is to create something based on the ABC show Galavant. Make a musical tabletop RPG, write a game in song, make a world that plays with the sort of meta-modern fantasy tropes of the show. Make that tribute to Timothy Omundson's beard you've been dreaming about. Whatever you like! It doesn't even have to be directly related to Galavant the show. Maybe you want to explore the idea of a musical, or a sitcom, or a self-aware fantasy realm, or you just really like Weird Al and Kylie Minogue. Get at it.

Music is such a beautiful thing, and so little explored in tabletop games, and I think it'd be cool if we played around with that.

At the end of the Jam, I'll talk about some of my favourite games on my twitter (@SandyPugGames) and I'll try and see if any podcasts want to chat about it. We could also put together a bundle at the end to promote everyone involved and put some coin in the castle coffers! Talk about your games on Twitter with the #GalaJam tag!

First person to make a Tad Cooper fan game gets one game of their choice from my catalog free btw.

Disclaimer: This jam is not endorsed by and has no connection to ABC or any official Galavant people. We don't own any rights, we're just fans making fan stuff or stuff inspired by the show.

The Final Season
$2.50
A Game About Making Do
Sandy Pug Games
A Hero's Journey
$2.50
A ttrpg full of adventure and song
angrynerdgirl
We Are All Tad Cooper
A Fiasco playset inspired by ABC's Galavant (ABC), especially Bruce the iguana’s turn as Tad Cooper
ParryCat
Galavant Dice
A push-your-luck dice game for 1-4 Players
Stormy Sto Helit
Another Sappy Song About Dragons
I super believe in you, Tad Cooper.
Puckett
A New Season - Galavant
Keep your favorite show alive through fan-mail and tweets.
Yubs
Shooter
Play in browser
Off On A Secret Mission
A musical drinking game of assassination and silliness for two or more players!
AJ Hileman
This Bloody Prestige
$5
A semicooperative song-writing icebreaker
Joe Young
powered by