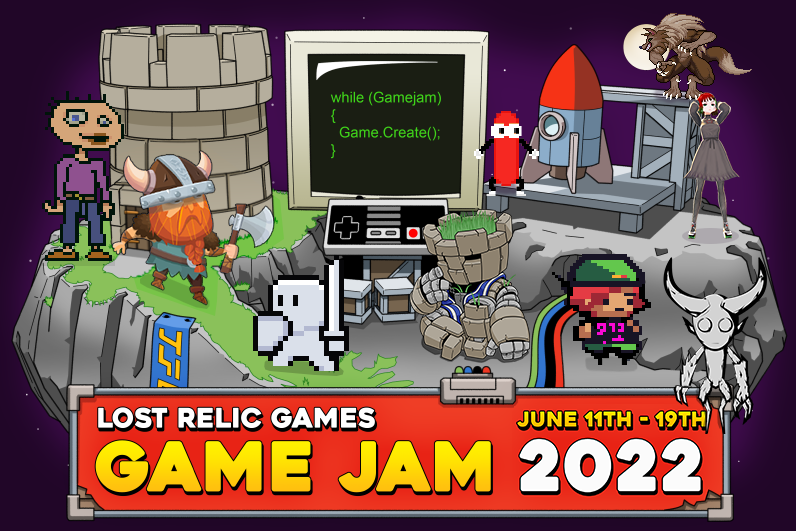 Hi all! It's John here from the Lost Relic Games YouTube channel. I'm excited to officially kick off the channel's first Game Jam!

To make this event extra special, I'm giving away prizes and rewards, and importantly exposure for the creators involved. I'll be playing all winning games and personal favs on my Youtube channel (over 50k subs).  I'm also giving non-winners and players a chance to win steam keys for top tier games.

Here is a current list of games I've secured keys for, and info on how to join the giveaway: Game Jam Prize List
To see me play the winning games on  YT, make sure you are subbed: https://bit.ly/2MpZ1ao

Winners will be announced on the Lost Relic Games Youtube channel in the days following voting end.

- Your game must not include any NSFW content.
- Any Engine or Framework is permitted, Unity, Unreal, Godot, Game Maker, etc.
- Open source /  royalty free assets can be used: graphical assets, 3D models, audio etc. Credit where required.
- 3rd part tools and kits may be leveraged, just be sensible, don't try submit some complete pre-made game template.
- Small team and Solo submissions both allowed. (Max 5 members).
- Games must be uploaded to itch.io (external site links will be disqualified).
- Do NOT submit android APK files.  For Max play-ability export to WEBGL (where possible), otherwise create a PC / Mac executable.
- Do not bring  existing, in-development projects to the Jam, you CAN however incorporate previously built systems / assets in a new way.
- Do NOT Submit games that gave been previously submitted to other Jams, instant disqualification.

Games will be voted on by the community across 5 categories: Game Design, Innovation, Art Direction , Theme, Fun.

After the submission period is over,  there will be a one week voting window.  Playing others games will give your own game a higher chance of discovery!

Winners will be announced on the Lost Relic Games Youtube channel in the days following voting end.
There will be several chances at winning:

► Primary Winners:  Games will be scored across all 5 categories, with those having the highest scores overall being the primary winners.
► Category Winners - Rewards and recognition will also be given to those with the highest scores in any one particular category!
► Lost Relic Favorite - There will be a special "Lost Relic Games Selection" where I and chosen members of the industry will chose our favorite personal favorites.
► Random Prize winners: Selected from a random pool.

► Primary Winners:
- Game featured on the Lost Relic Games YT channel
- A choice of steam keys from a list of popular steam games
- Or a choice of of any premium game making asset from our sponsor Kronnect
- Discord Jam Winner Role
- Grand winner bragging rights!

► Category Winners
- Your game featured on the Lost Relic Games YT channel!
- A choice of of any premium game making asset from our sponsor Kronnect
- A choice of steam key from a list of popular steam games.

► Lost Relic Favorite
- Game featured on the Lost Relic Games YT channel
- A choice of of any premium game making asset from our sponsor Kronnect
- A choice of steam key from a list of popular steam games.

► Random Prize Winners*
- A choice of steam key from a list of popular steam games. So far I've secured hundreds of dollars worth of keys, with more to come!

To take part in the Steam key give-away, visit the link below and add your email (key will be sent to this email)
You can also find the list of games being given away:
https://lostrelicgames.com/game-jam-prizes/

1. Can I join with multiple projects? For example; one solo project and one or more group projects
You can submit any amount of projects. Is it doable? That's up to you or the team.

2. What are the allowed build/export platforms?
Desktop (Windows, Mac or (and) Linux) and WebGL/HTML5 games. Preferably go with a platform like WebGL for better accessibility and more visibility.  No APKs please. (nobody will install them).

3. Can I use ready-made assets and scripts?
Of course, you can. Whatever makes it easier for you. Both paid and free tools are allowed.

4. What's the theme for the Lost Relic Game Jam?
It's not yet revealed. It should be revealed approximately 24hrs before the start of the Game Jam.

5. How can I find partners to collaborate?
We have a dedicated channel on the discord for finding Jam collaborations!

6. What is the max allowed team size for the Jam?
In order to avoid unnecessary disadvantages between entries, teams can be up to 5 members. That includes all the roles (for example; 2 devs, 2 artists, 1 sound designer).

7.  Can I use old projects, or old Jam entries?
It is expected that submissions are freshly made for this jam. Yes you can incorporate previously built systems and art. But they should be used in a new / fresh way.

Good luck to all participants!

A big thank you to the following people:
AlexG for making the Jam Banner background
Seanchaoz, Kiltec, Ashfid, Aldabern, xcic, Kostur for creating the banner characters
And finally a huge thanks to Alex, George and Ashfid for helping everything sail smoothly, you guys are the best! <3

We are also proud to have this event sponsored by Kronnect, a maker of premium game-making tools and assets. They have generously donated any 10 of their premium Unity Assets to the Game Jam Prize Pool. Thank you Kronnect!