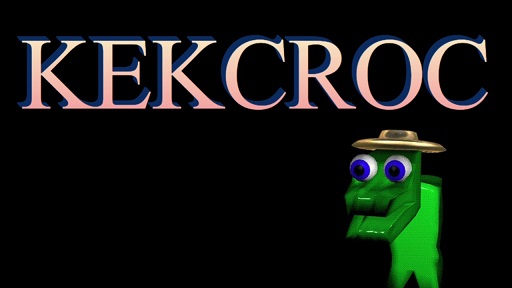 All you have to do is make a fan-game about Kekcroc. The rest is up to you as long as you are making a Kekcroc game, you can do anything you want here...

What is Kekcroc? A lost media video game franchise from 1993, it began as a plat-former with wonky controls and some lazy developers but since then most people who remember playing the game as a kid are unable to find their old copies anymore, and contacting the old developers has been difficult. Kekcroc started as a platformer but made a lot of spin-off games in multiple genres before eventually fading away into obscurity.

The rules are simple: Make a game using the character Kekcroc, everything else is up to you. This is what Kekcroc looks like:

"ROCK AROUND THE CROC!"

Additional info about Kekcroc: In games where Kekcroc fights: his primary weapon is a toilet plunger called the croc-plunger, his currency is "Crocodollars." The main antagonist of Kekcroc is an alligator named "Toasty" and he looks exactly like Kekcroc except he is golden with a green hat. Toasty is Kekcroc's high-school rival from band class, Kekcroc was always a better guitarist than Toasty and in the original game you invade Toasty's castle to defeat his evil schemes once and for all, but nobody has ever defeated Toasty's castle and lived to tell the tale...

Kekcroc has been featured in many cooking and racing games, you can make any kind of game you want as long as it features Kekcroc, the rest of the Kekcroc cast is optional but here is what the cast looks like:

Here is what Kekcroc's voice sounds like, in case you would like to add your own audio: https://www.youtube.com/watch?v=QmsEp6WGIbg