Tiny game about starting fires and keeping them that way
Submitted by Iris6 — 1 day, 2 hours before the deadline
Add to collection 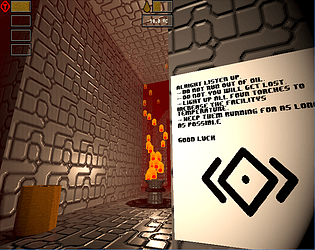 Interesting game! I included it in my Godot Community Jam compilation video series, if you’d like to take a look. :)

Fell of the map many times until I understood what happened, maybe those holes can be filled with cold water to get more in the theme.

Not too much to say. I eventually found a loop for keeping all the barrels full. Then things went a bit purple, then I ran out of oil and died.

So all said, a pretty good analogy for the East Midlands.

Nice work, I like the atmosphere and the simple yet confusing map layout :)

I got up to 45°C or something before running out of oil inches away from a barrel... but it was likely empty already :D

I had some trouble navigating the map and would have loved a mini-map. My character is out there, somewhere, in the dark. Please send help.

I'd like to think that being lost in the dark is part of the game. The map doesn't change and you can figure it out though! But the main challenge is that it's hard to navigate at first. I'd have to add something else to overcome first in order to add a minimap, and it's a game jam so! I ain't got time for that.

As I said on the stream I really like that texture on your world model. The game looks nice. Did you use portals for the "getting lost" bit? Or was my mouse so sensitive that I kept getting turned around?

There's no portals, but the map is confusing on purpose. You can learn it, though! I think my high score is getting it to 85 ºC?

Normal maps can make even my low res textures look pretty good, and I had managed to figure out how to add some, so... couldn't help but throw some in!

Add the corresponding platform to the files :)

I quite liked it, even if there was no clear end condition  (was there?) With the way the fires went out after a certain amount of time, it was _very easy_ to get lost trying to find your way back to that one fire you forgot to light, some atmospheric music/sounds would have been really nice!

It's more of an high scoring game rather than one with a clear ending. If you get it hot enough, the map'll lit up, which is a minor "You're doing well enough." reward I guess.

And yes, music or sounds would've been great, but I like making most of my assets myself and there were things higher on the list to take care of! Maybe once rating's over I'll roll out one more release with some polish, we'll see.