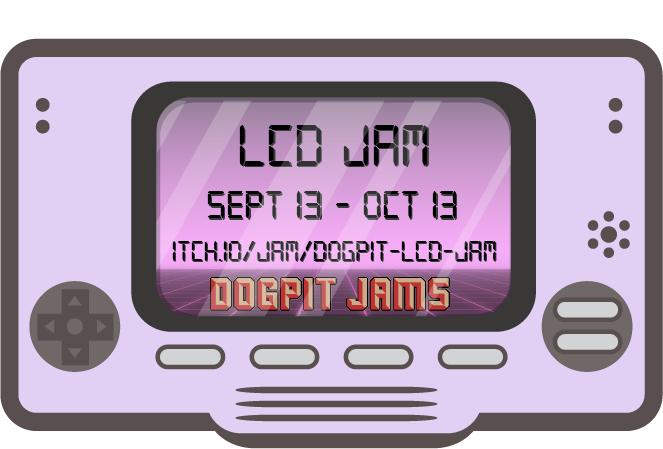 Make an old LCD-handheld-style game - with a twist!

Make an LCD-style game that follows the theme announced at the start of the jam.

YOUR JAM THEME IS: Cutting Edge

About LCD Games: you can read up on the topic here:  https://en.wikipedia.org/wiki/Handheld_electronic_game and check out the emulated handhelds at https://archive.org/details/handheldhistory

Joining a team Participants are strongly encouraged to team up with other entrants! Find people who complement your strengths! Looking for teammates? Come say hi in the Dogpit Discord! We also encourage you to say hi in the discord regardless and meet other chill gamedevs, artists, game audio people, voice actors, and other neat folks!

Contact @TeamDogpit or info@teamdogpit.com. Tweet your game WIPs with the hastag #dogpitjam so we can find and retweet them!

Jam Stream: All entries will be played live on stream with commentary by judges. Livestream dates will be announced after the close of submissions.

Q: I'm not very good at making games, should I enter? A: Yes

Q: Can I use Gamemaker, Unity, Unreal, my own boilerplate, and/or my own engine?  A: Yes

Q: Can I reuse my own code from prior projects? A: Yes, though if you do so it would be sporting to open source that code and link it in the community Discord server so that anyone could use it if they wanted to.

Q: Can I take a game I have already made and modify it to fit the theme?  A: No

Q: Can I join the jam after it has already started?  A: Yes, you can join at any time. You just have to submit a game before the deadline.

Q: Is there a limit to the number of people that can be on the same team?  A: No

Q: Can I submit more than one game? A: Yes

Q: Can I use open source assets, unity store assets, or other assets that are available to the general public?  A: Yes

Q: What happens if I don't submit my game in time?  A: Your game won't be judged and won't be played on the livestream. I still encourage you to keep working on the game on your own time though.

Q: Can I update my game after the end of the jam?  A: Yes but judging will be based on the copy that was submitted by the deadline.