Paddle back and forth by telling lies and truths!
Submitted by adsjohansen (@adsjohansen) — 21 hours, 4 minutes before the deadline
Add to collection 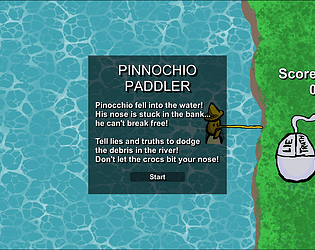 That was a solid entry. I liked the graphics  and the endless runner concept was original. You kept the theme simple without bugging the player like so many other games did.

I haven't worked in Unity very much (only twice before this game jam), so taking on the itch.io Community Game Jam was intimidating. I do have quite a lot of experience in Unreal Engine 4, but the restrictions of this game jam led me to decide that I might as well give Unity another go.

The prospect of doing everything myself - art, audio, animation - on top of design was terrifying, and explains why this was suggested as a team game jam. This was especially worrying as I also stumbled to gain comfortable footing in Unity.

Despite all of this, I've surprised myself with how much I've managed to figure out as I went, without using any tutorials (a stupid way to approach this, I know, but I wanted to make something that was entirely my own), and I think I've managed to create a half-decent game.

I still prefer working in UE4, just because I've made twice as many games in Unreal than I have in Unity so I'm more used to it.  That being said, I don't think I'm afraid of using Unity any more, which is good. :)