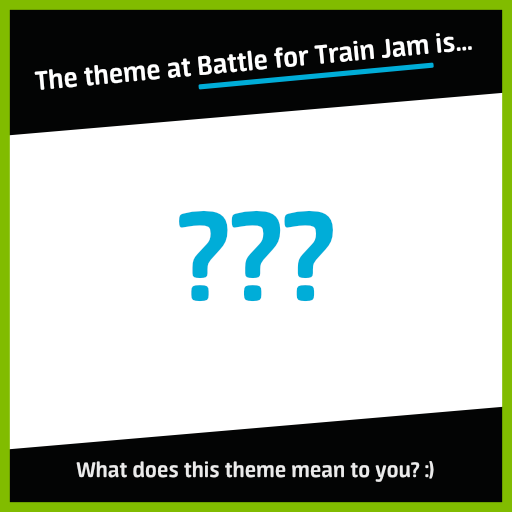 About the Battle for Train Jam

Students will create a game over the course of a school week to demonstrate their jamming and cooperation abilities. This is to determine a sufficiently capable team that we will feel confident in sending off on a train.

To register your team for this event, follow the link below:

A free space to upload files (or retrieve AIE packages) is below:

Train Jam is a 52-hour (hopefully) game jam spanning across the entirety of the journey from Chicago to San Francisco. A pre-jam social occurs on the night before as a warmup for social funtimes. For more information, check the official Train Jam website at trainjam.com.

Students participating in Train Jam are eligible for mentorship and portfolio interviews from volunteer industry members that will also be on the train.

We will be offering to send three students to Chicago to participate in the trainjam.

Here's a quick list of what AIE would cover:

The student will be responsible for food and lodging in San Francisco during that period of time.

In order to avoid any pretenses of favoritism or unfairness, we opted to go with a mini-competition from which the team with the "best" game will be shipped to Chicago for Train Jam.

The classrooms will be open according to our typical operating hours, which are from 9am to 6pm.

Student teams must register at the registration portal by the deadline.

The games will be judged against the following criteria.

Do we have to make everything from scratch?

The base expectation is that you are going to be creating all of your code and relevant assets from scratch as much as you possibly can. We want to send the most capable team we can, so we need to judge you on what you can do, not what Unity's demo team can create or KenneyNL can provide you.

Derivative works are permitted so long as they pass the bar for compo games set forth by the team over at Ludum Dare. While subjective, you should find yourself in the clear if you have transformed the work in some meaningful manner.

For further clarity, review the article from Ludum Dare and send questions to the organizer (listed below). If there any differences between the Ludum Dare rules and what is displayed on this page, this page will take precedence.

Q: Can I use tools, such as bfxr, to generate sound effects?

Tools like Unity, FruityLoops, etc., are totally permitted. The limitation on usage mostly pertains to existing assets designed to be used as-is.

For example, if FruityLoops comes with a sample song, you cannot use it directly; you must remix or sample it in a significant manner for it to be consider acceptable.

Q: Can I use base meshes or project templates?
Yes, as long as you transform the prior work into something new and different. You are not permitted to use the asset as-is for the game jam.

Publicly accessible includes libraries that you must pay in order to be able to use, though this may change in the future.

All third party works must be licensed appropriately whether paid or not; it must provide for a license that permits you to use it in the development of a game.

Q: Can I use work from my previous projects?
Yes, but only under conditions similar to that of third-party works. You must create derivative works from it (e.g. remix a texture or sound) or build on top of it (i.e. use a framework for a FPS game), but it can't be used alone as-is.

While third party works must be licensed, previous works do not have to be licensed. (This permits the use of personal scripts or starter assets that you personally use in your own work and may not want to share publicly.)

These services exist in a much more gray-area because they are primarily online-only and would not be readily accessible during the actual Train Jam, where Internet access is limited. Your project must make light use of these services.

For example, using animations from Mixamo is permitted but the characters are not. You must disclose the use of this service at the time of submission.

No, the classrooms will be closed when the campus closes, which is at 6pm, as per usual.

Q: Can I work from home?

Yes, but we must stress that your health should come first. Although you may work at home at your own discretion, know that the change in format from an 8-hour game jam to a 3-day game jam was done to even out performance differences between students as well as create a healthier event.

You can get in touch with Terry Nguyen <terry.nguyen@aie.edu> if you have any questions or concerns that you would like to express.